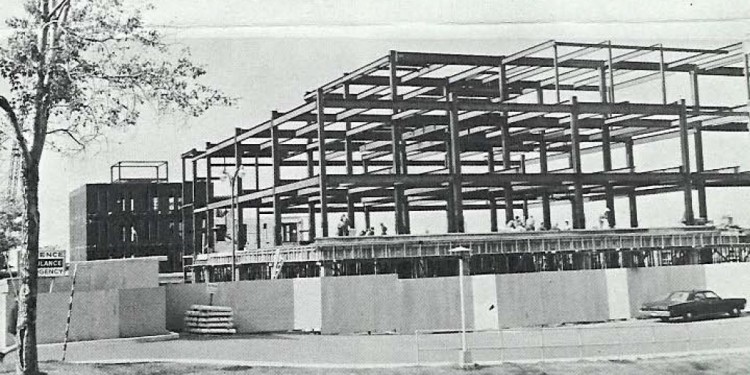 By fall 1968, construction of the framework of the Lady Davis Institute was under way, with the facility on schedule to open the following year. Also being built at that time was the Institute of Community and Family Psychiatry (at rear, to the left), which was launched in 1969.

In 1969, the Lady Davis Institute opened at the JGH and went on to become one of Quebec’s leading facilities for medical research in such fields as cancer, clinical epidemiology, molecular and regenerative medicine, and the psychosocial aspects of disease.

Among those present for the groundbreaking of the Lady Davis Institute on April 16, 1968, were (from left) JGH President Sam Steinberg; Dr. Norman Kalant, Director of the LDI; and Bernard Bloomfield, President of the LDI’s Board of Directors.

Research had actually been one of the pillars of the JGH since the 1940s, with medical leaders, administrators and the Board of Directors all recognizing the crucial role that innovative investigation could play in improving the treatment and care of patients.

In 1965, Samuel S. Cohen, the JGH’s founding Executive Director, declared that “the long-term objectives of a hospital’s research program are to provide opportunities for bright, capable, young physicians to engage in investigative work and, through this means, retain them as the future treating physicians for the community.

“The JGH’s program over the past 10 years has demonstrated the value of this approach. We have on our staff the most capable specialists who, but for the opportunity provided for them in research and teaching within the Hospital, would have been lost not only to our Hospital, but probably to Canadian medicine.”

Unfortunately, facilities for research were scattered throughout the hospital, and projects were not always conducted in ideal circumstances. By the 1960s, determined to launch a research institute, the JGH it secured funding through a large gift from the Eldee Foundation and grants from the federal and provincial governments.

Ground was broken on April 16, 1968, and the facility opened the following year. It was named in tribute to the late Lady Henrietta Davis, C.B.E., who had established the non-profit Eldee Foundation several years earlier.

Lady Henrietta was the widow of philanthropist Sir Mortimer B. Davis, whose major support for the JGH resulted in his name being added to the hospital’s official name. She had also been a principal organizer of the Canadian branch of the International Rescue Fund, which brought European scientists and scholars and their families to Canada.