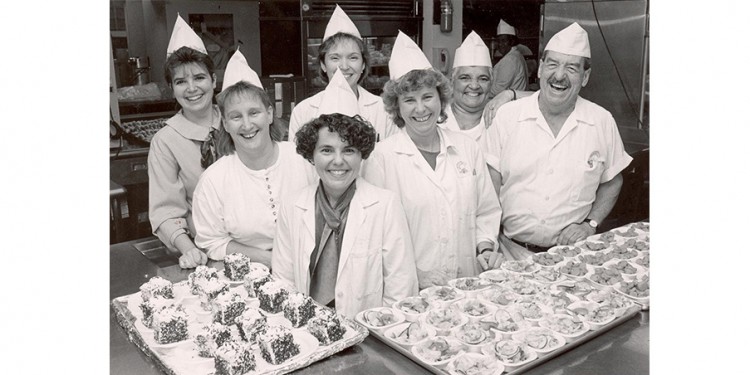 It’s been said that an army marches on its stomach—and much the same is true of a hospital as large as the JGH. Not only does the kitchen prepare thousands of meals a day for patients, it used to supply the old cafeteria which sold its last item on November 18, 2016.

The main aisle of the cafeteria on November 17, 2016, one day before it closed for good.

For decades, the cafeteria had been more than a purveyor of meals, snacks and treats (pizza, pastries and roasted potato chunks were among the highlights). It was also a focal point for patients, visitors and staff, a place where servers and customers exchanged jokes and stories, and cafeteria staff could be counted on to wear the JGH’s best costumes on Halloween and Purim.

But time marches on. After Pavilion K opened in early 2016, a direct, time-saving pedestrian route was needed between the main entrance and the new wing. The only solution was to close the cafeteria and convert it into the passageway that now connects the main lobby to Carrefour Lea Polansky. All that remains now is memories.

From the archives: Tobacco sales banned on JGH premises

From the archives: Ground is broken to start construction of the JGH