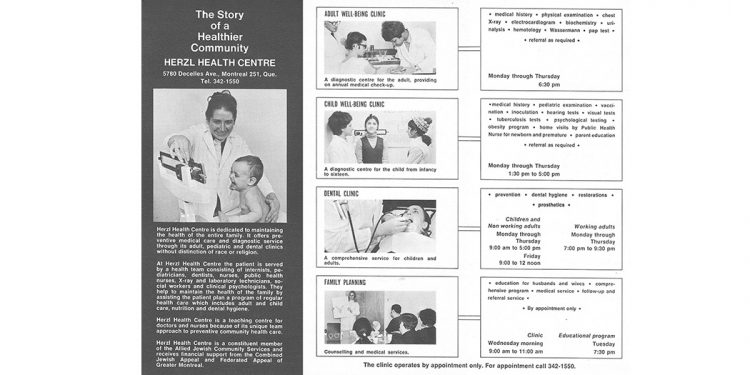 Brochure published by the Herzl Health Centre in the 1960s.

For more than 60 years during the 20th century, countless numbers of patients received vital health care in what was originally known as the Herzl Dispensary and later renamed the Herzl Health Centre. But by the mid-1970s, its time as an independent facility was at an end, as a result of its merger with the JGH.

The Dispensary opened in 1912 primarily to treat the many impoverished Jewish immigrants who were arriving in Montreal. However, the Dispensary also welcomed patients of all backgrounds, and this policy of non‑discrimination served as a model for the JGH, which opened in 1934.

For decades, Herzl continued to provide a wide array of services, but by 1970, it was overcrowded and unable to keep up with the demand. In addition, the JGH and Herzl were increasingly offering overlapping services to an overlapping clientele.

From the archives: Bracelets for newborns