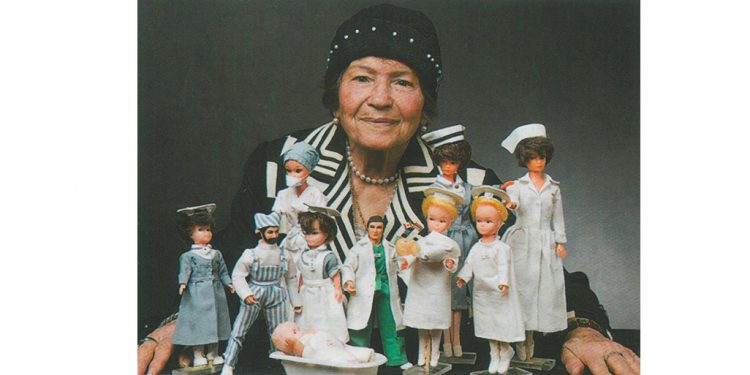 Ossana Zeitounian, seamstress extraordinaire, in 2009 with a few of the dozens of dolls for which she sewed healthcare related uniforms.

There’s no doubt as to which of the JGH’s many healthcare teams is the best dressed. Its members—more than 100 strong—are just 15 to 30 centimetres tall and are based in a pair of display cases in the first-floor passageway between Pavilions C and G.

Ossana Zeitounian in 1988 with the full array of dolls.

They’re impeccably dressed dolls, a product of the creative vision and nimble fingers of Ossana Zeitounian, a beloved former JGH Housekeeping employee. To mark the 50th anniversary of the hospital in 1984, Ms. Zeitounian hand‑crafted each tiny article of clothing and presented the fully clad dolls to the JGH as a gift.

Included in the array are doctors, nurses, orderlies and other types of healthcare workers dressed in exact replicas of JGH uniforms of decades past. So precise is the detail that several dolls have the varying uniforms that student nurses wore at different stages in their education at the JGH School of Nursing during the 1950s and ’60s.

To acknowlege Ms. Zeitounian’s outstanding efforts, the hospital presented her with a special plaque in 1985, singling her out “for distinction in handicrafts”.

Ms. Zeitounian, who retired in 1993 after 23 years’ service, learned her basic skills from her father, who was a tailor, and her mother, a dressmaker, while growing up not far from Beirut, Lebanon. Later, she refined her abilities by taking courses in France and Armenia, and eventually emigrated to Argentina and finally to Canada.

Creating the uniforms took six months of her spare time, but Ms. Zeitounian insisted it was worth every minute, because “I loved the hospital like my own home. I still love it very much.”