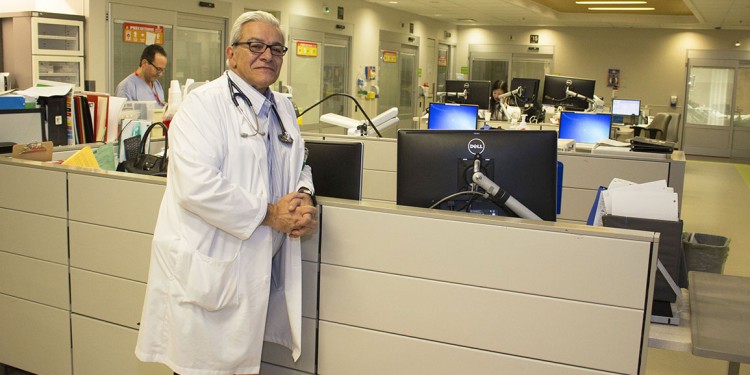 Dr. Marc Afilalo in the green pod of the JGH Emergency Department. The doors along the rear wall open into patients’ rooms.

Dr. Marc Afilalo, JGH Chief of Emergency Medicine, has become the first physician in his specialty to be appointed a full professor in the Faculty of Medicine at McGill University.

Not only does the appointment recognize his leadership of Quebec’s busiest emergency department, it acknowledges his extensive experience in teaching, research and advising the government since the 1990s on ways to ease overcrowding in emergency rooms across Quebec.

“This may be an individual honour, but in my view, it reflects on everyone in our department, where the focus is always on teamwork,” says Dr. Afilalo, who joined the JGH in 1981 as an attending physician, and was appointed chief in 1986. “We have a fantastic team, and I couldn’t have accomplished as much as I have without their support.”

Particularly gratifying, he notes, is the knowledge that his work has a ripple effect on numerous patients beyond the JGH. “Crowding has always been a big issue everywhere, and if I’m able to succeed even a little bit, it means the potential exists to help millions of other patients in other emergency departments.”

Dr. Afilalo says he is happy that specialists in emergency medicine have enjoyed lengthy careers, contrary to the prevailing opinion decades ago that most doctors would succumb to stress and burn out after five years. “Despite what everyone thought initially, the more you go at it, the more you love it. Also, our doctors know that they can count on the support of their teams, and I think this is the reason for our success.”

While Dr. Afilalo’s appointment will barely change his day-to-day duties at McGill, it has altered his general outlook, since he now sees himself as a more prominent representative of the university. “You become the face of McGill,” he adds, “and you have to be aware of it constantly.”

What remains unchanged, he explains, is his enthusiasm for emergency medicine—a specialty that, despite its difficulties, often rewards its practitioners by enabling them to witness the relatively prompt relief of the patients they’ve assisted.

“From day 1,” he says, “I felt this was a fantastic way to help patients who are suddenly in need because of situations that shock them, that stress them, that worry them. Seeing the faces of the patients who are feeling better fulfills me every single day.”

Keep your sunny side up during dark winter days