From the archives: Ground is broken to start construction of the JGH 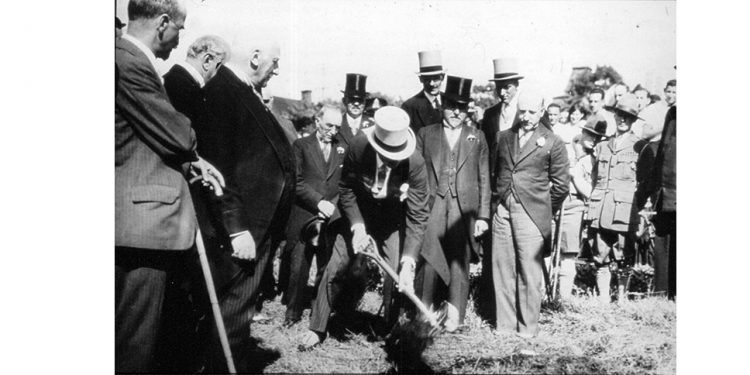 On August 3, 1931, Canada’s Governor General, Lord Bessborough (centre, with shovel), turned the first sod to start construction of the JGH. Joining him at the ceremony were (from left) Hirsch Wolofsky (with cane), Editor of the Jewish Daily Eagle; A.M. Vineberg, Chairman of the Building Program; Michael Hirsch, Co-Chairman of the 1929 Building Campaign; Joseph Levinson Sr., Treasurer; Rabbi Herman Abramowitz of Congregation Shaar Hashomayim; and Allan Bronfman, Co-Chairman of the 1929 Building Campaign.

One of the most stirring milestones in the history of the JGH was the day when ground was finally broken, on August 3, 1931, to start construction of the hospital. Present as the guest of honour was none other than Canada’s Governor General, Lord Bessborough, who would return a little over three years later for the official opening.

The day began with a sumptuous luncheon (suprême de volaille sous cloche, pèche melba and other delicacies) at the Montefiore Club, followed by a tour of the Hebrew Educational Institute, the Hebrew Old People’s Sheltering Home and the Young Men’s Hebrew Association.

When the dignitaries finally reached the hospital site, they were greeted by more than 1,000 spectators and a band. After speeches by several officials, Lord Bessborough was handed a spade and he proceeded to turn the first sod to the cheers of the crowd and the strains of “The Maple Leaf Forever”.

The final words on that momentous day were Lord Bessborough’s: “In breaking the earth on which this great hospital is to be erected, I express my sincere hope that, with God’s blessing, it may long fulfill the errand of mercy for which it is destined.”