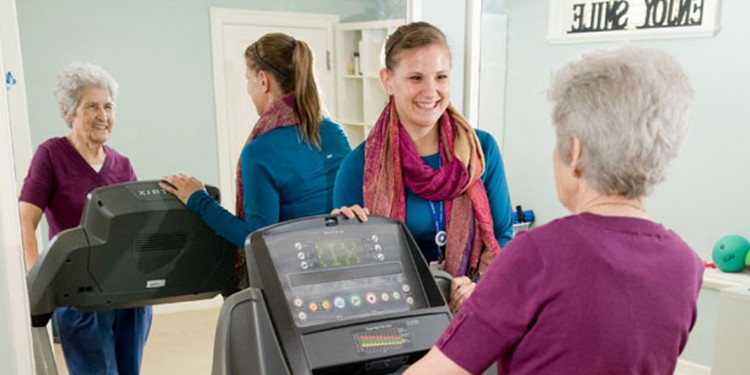 The JGH Hope & Cope Wellness Centre’s gym has been expanded to accommodate the growing number of individuals seeking the benefits of a personalized exercise program during or soon after their treatment for cancer.

Floor space in the basement of the Côte Ste-Catherine facility (also known as Lou’s House) has grown by about 20 per cent to make room for new users and additional equipment. Two new floor-to-ceiling, wall-mounted mirrors (for a total of five) also provide users with multiple angles to monitor their exercise technique as they follow the instructions of staff.

According to a Hope & Cope spokesperson Hena Kon, the renovations—costing just under $10,000—were financed by proceeds of an annual walkathon organized and hosted by Dorval, Sources and St-Henri Auto Parts. The 2013 edition raised $69,000 for Hope & Cope’s physical activities program, with this year’s event scheduled for early September.

The gym and other programs at the Wellness Centre are available to all individuals who have cancer or are recovering from the disease, regardless of which hospital they are treated in.

Exercise physiologist Lisa Mastroianni says the gym’s expansion reflects Hope & Cope’s commitment to exercise for cancer patients, a concept that is continuing to gain momentum nationally and globally. She explains that even though individuals with cancer were once viewed as fragile, they can now follow a customized and supervised exercise plan. As a result, they have been found to fare significantly better, with fewer side effects of their treatment, easier recuperation, better stamina and less fatigue.

Suzanne O’Brien, Executive Director of Hope & Cope, notes that some recovering cancer patients are now planning to participate in a seven-kilometre walk. “The key,” she says, “is to provide proper professional support that takes into account the treatment that a person has received, the extent of scarring and the range of motion that a person is capable of.” Ms. O’Brien adds that the Wellness Centre’s broader objective is to help individuals during the initial stages of their exercise, so that they can eventually continue on their own at their local gym.

Dr. Carmen G. Loiselle, Hope & Cope’s Scientific Director and Co-Director of the Segal Cancer Centre at the JGH, says bone health is of particular importance among women with cancer, because they are at higher risk for bone fragility and fractures. “This is where Hope & Cope can play a crucial role in prevention,” she says. “If you’re diagnosed with cancer and are also found to have low bone density, an exercise program needs to be customized for you.”

Attention to overall physical health is also behind a $600,000 grant that Hope & Cope just received from the Quebec Breast Cancer Foundation to conduct a three-year, community-based, multi-disciplinary project into bone fragility among women recently diagnosed with breast cancer.

“When it comes to actual cancer treatment and follow-up, personalization is key,” says Dr. Loiselle. “Hope & Cope believes that the same should be true for all aspects of cancer care that’s focused on an individual, whether related to exercise or other aspects of physical and emotional health.”

Decades of success confirm the superiority of dental implants