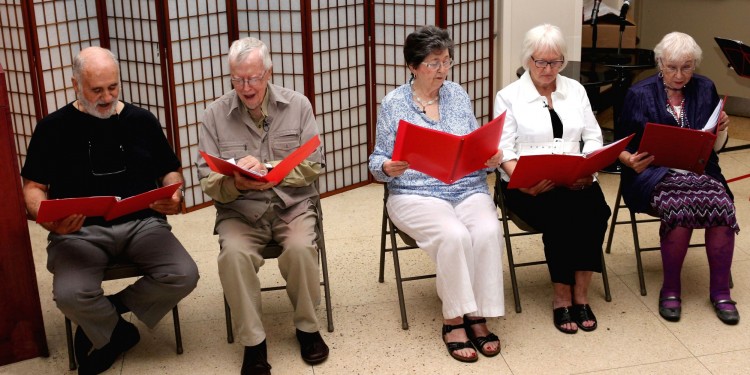 One of the novel aspects of the 2015 JGH Mini-Med School was the staged reading of a play, written and directed by Terry Griffin-Burman, with musical accompaniment by cellist Rachel Burman. The production, about the emotional ups and downs of the elderly, starred (from left) Pasquale DeBlasio, Dan Delaney, Patricia Delaney, Sheila Moriarity and Nancy Cree.

Not everyone who expresses an interest in a radical religious or political ideology is dangerous, but these individuals may be emotionally or psychologically vulnerable, and they might benefit from the support of family and friends, the audience heard at the 13th annual JGH Mini-Med School.

Dr. Zoë Thomas, who is doing clinical rotations at the JGH during her third year of residency in psychiatry at McGill University, recalled treating a 14-year-old girl who was doing poorly in school, appeared to be alienated from those around her, and seemed in danger of becoming radicalized.

After speaking with the teenager, Dr. Thomas discovered that that she had immigrated at a young age, was exposed to violence in her low-income family, and played a difficult role as a caregiver in her family. As a result, she turned to fundamentalist religion to provide structure for her chaotic life.

Counselling was appropriate for this young woman, Dr. Thomas explained, but teachers and other authority figures should not have been so quick to negatively stereotype her. Instead, society must differentiate between an alienated person who needs treatment and someone who is truly intent on killing in the name of religion.

The radicalization of adolescents was one of the hottest and timeliest topics in the five-session series of the JGH Mini-Med School, presented last spring by the Department of Public Affairs and Communications. In examining various aspects of mental health, JGH experts geared their remarks to a general audience, whose members received diplomas and the honourary title of “mocktor” at the end of the series.

In the session on radicalization, Dr. Laurence J. Kirmayer, Director of the Culture and Mental Health Research Unit at the JGH Institute of Community and Family Psychiatry, reminded the audience that radical ideas—in fields such as science and the arts—can sometimes be extremely creative and can lead to progress and innovation. The challenge, he said, is in determining whether certain radical ideas can lead to violent behaviour.

At one Mini-Med session, Cecile Klein celebrated her 108th birthday with a cake presented by Marisa Rodi, Events Coordinator in the JGH Department of Public Affairs and Communications. Mrs. Klein has attended every Mini-Med series since the program debuted in 2003, showing a keen interest in continued learning at any age.

Dr. Myrna Lashley, an internationally recognized authority on cultural psychology and an adjunct researcher and project leader in the Lady Davis Institute at the JGH, added that some individuals become radicalized for a wide variety of reasons. These include a desire for adventure, the wish to correct a perceived wrong, a deep desire to have like-minded comrades-in-arms, and a hatred for what is seen as the decadence of Western society.

Some other Mini-Med highlights:

For 13 seasons, the JGH Mini-Med School has attracted a total of more than 2,000 “medical students” to lectures on dozens of topics, from surgery to research to family medicine, says says Glenn J. Nashen, Associate Director of Communications and Media Relations. Many more have enjoyed watching videos of previous sessions online.

For generously supporting the 2015 series, the JGH Mini-Med School extends its thanks to:

Dr. Cécile Rousseau – In the aftermath of war: Helping children to regain trust
Date : Tuesday, May 19, 2015