Head of JGH Foundation honoured for outstanding career in philanthropy 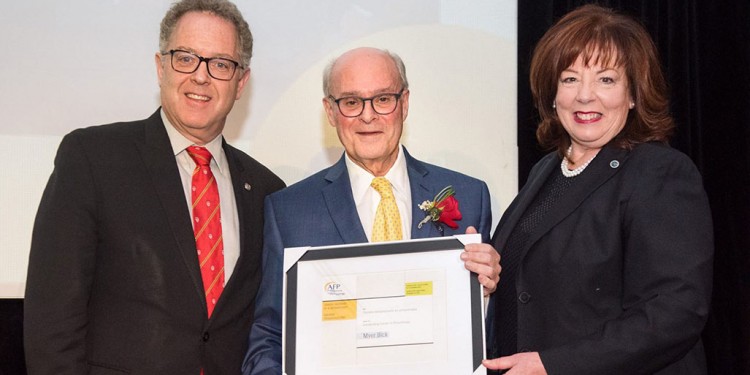 Myer Bick, President and CEO of the JGH Foundation, has been recognized by his peers with an Outstanding Career in Philanthropy Award. Accepting the honour from the Quebec branch of the Association of Fundraising Professionals, Mr. Bick called his 16 years at the Foundation more rewarding than anything else he has done.

“The greatest satisfaction has been the fabulous people I’ve worked with, the vast learning they have afforded to me, and the pride and satisfaction of donors who see what their generosity has accomplished,” Mr. Bick said on November 15 at the Hyatt Regency Montreal.

“I’ve learned that it is essential to try to attune one’s ears to listen attentively, to focus one’s eyes to see clearly and, perhaps most important in our profession, to open our hearts to the feelings and emotions of others.”

Mr. Bick joined the Foundation in 2001, after a distinguished career in community service and as a senior executive in the real estate industry. At the JGH, he soon established a $200 million goal for fundraising campaign—quadruple the previous objective—which was eventually met. The $250 million goal of the current campaign will soon be achieved.

Mr. Bick also lends his expertise to several major organizations as a member of the Board of Directors of the Association of Foundations of Quebec Healthcare Establishments, the Segal Centre for the Performing Arts, the Azrieli Foundation and Tel Aviv University, among others.

In introducing Mr. Bick, Marc Weinstein, Vice-Principal of University Advancement at McGill University, said the honouree “is considered, with good reason, one of the doyens of our philanthropic community.

“He is a mentor to many youth professionals and volunteers in the areas of philanthropy, health, education and culture, always reachable day and night, always with a great sense of camaraderie, openness, determination and a sense of humour, and always the consummate professional in all that he does.”

The event’s keynote speaker, the Right Honourable Jean Chrétien, former Prime Minister of Canada, urged members of the audience to continue their fundraising efforts on behalf of those in society who need their support.

Mr. Chrétien said that as a student of modest means, he was fortunate to receive an educational bursary from a generous donor. This helped put him on the road to a career in federal politics, he explained, because for the first time, he had the freedom to pursue his dreams.

Dr. Philip Gordon honoured for a lifetime of excellence in colorectal surgery