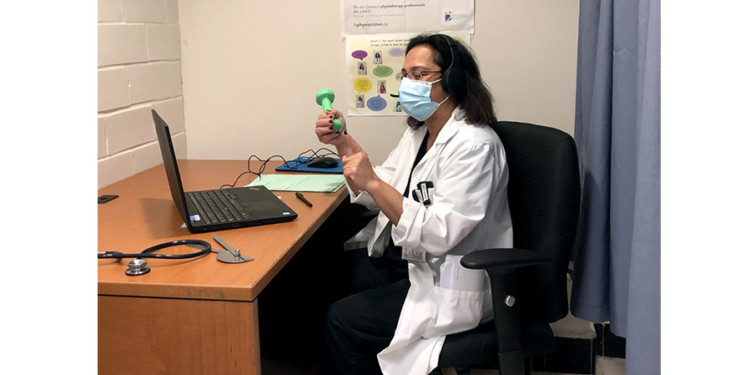 During a telehealth session, physiotherapist Mojdeh Hedjazi uses a visual platform on her laptop to demonstrate an exercise technique to a patient.

Although telehealth is still a relatively new way of obtaining healthcare support at home during the COVID-19 pandemic, it has won the approval of a sizeable majority of JGH patients who received physiotherapy services remotely last spring. 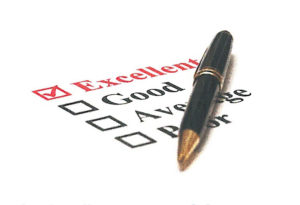 This high level of satisfaction reflects the positive responses to telehealth that have emerged from surveys carried out by CIUSSS West-Central Montreal.

In the physiotherapy survey, 86 per cent of those who completed the questionnaire agreed that they received tele-rehabilitation services that met their needs. As well, 83 per cent said they were given services that they felt were appropriate for them.

In fact, 41 per cent were so satisfied with tele-rehabilitation that they said they would still opt for this type of session, even if the pandemic were not a consideration.

Telehealth has become a significant factor in the delivery of health care during the pandemic, because patients need a way to stay home and minimize their exposure to the virus, while maintaining contact with their healthcare providers via video or phone.

By spring 2020, with telehealth up and running in many healthcare fields in CIUSSS West-Central Montreal, providers were already beginning to hear informally about their patients’ positive experiences.

However, surveys were introduced, so that those opinions could be gauged more precisely and patients could have an opportunity to suggest ways of improving the virtual services.

In the physiotherapy survey, questionnaires were emailed to 124 patients who had participated in at least one tele-rehabilitation session between May and July of 2020. The impressive response rate of 29 per cent, a statistically representative sample, is considered to be good for this type of survey.

The results have delighted Maria Ambrosio, Outpatient Clinical Coordinator, and her colleagues in the JGH Physiotherapy Department. She says the findings confirm how much can be—and has been—accomplished at a distance, even though her field has historically been very hands‑on.

Additional articles in the current series
• How COVID-19 yanked telehealth out of the future and into our daily lives
• Family medicine teams defy COVID-19 by linking to patients via telehealth
• Pandemic motivates midwives to give birth to new telehealth services
• Using the digital tools of telepsychiatry to forge emotional bonds
• Telehealth opens new doors—and video screens—to rehabilitation at home
• Telehealth becomes vital nursing tool in monitoring patients’ health at home
• Telehealth plays key role in Radiation Oncology, even though treatment is provided in person

Other articles
• Telehealth is positive legacy of COVID-19 pandemic, medical leaders say
• Telehealth intervention to reduce isolation of older adults
• How the Segal Cancer Centre is responding to the coronavirus pandemic
• Telehealth: The future of health care is already here

Ms. Ambrosio says that based on the comments in the survey, as well as suggestions from the patient partner who consults with the physiotherapy team, work is already under way to make the service even better.

Ms. Ambrosio says that based on the comments in the survey, as well as suggestions from the patient partner who consults with the physiotherapy team, work is already under way to make the service even better.

For example, says physiotherapist Mojdeh Hedjazi, patients who are scheduled to participate in tele-rehabilitation are getting more information in advance about what to expect during their first session and how to prepare.

Once the session begins, she says, physiotherapists are also explaining in greater detail how patients’ privacy is being safeguarded during clinical interventions via Zoom.

“It’s been rewarding to learn together and know we can help our patients, even during difficult and unusual times.”

Paula Calestagne, a CIUSSS Advisor for the Patient Experience, Quality and Safety, notes that Physiotherapy was quick to implement improvements, even though concerns about information and privacy were raised by only a small percentage of those who responded to the survey.

“By the end of the meeting where I was reviewing the results with the Physio team,” recalls Ms. Calestagne, “they were already starting to create an action plan to enhance their services. Their reaction to the survey was almost instantaneous and I found this so encouraging!”

Krystle North, a CIUSSS Advisor for the Patient Experience, Quality and Safety, says surveys are ongoing or have been completed in Physiotherapy, Gyne-Oncology, the Oncology COVID-19 Clinic, Outpatient Rehabilitation and various other medical clinics.

Planned for the coming months are surveys in Mental Health and a variety of CIUSSS-wide clinics. As well, says Ms. North, many of the medical clinics that were surveyed during the first phase of the pandemic will be re-surveyed to see how patients felt about them in the second phase.

She adds that many of those who have responded to the questionnaire have said they do not want virtual appointments to replace all in-person visits. However, these patients also feel that telehealth can play a valuable, ongoing role for specific individuals in certain situations—for instance, the elderly or those with chronic illnesses.

Now that Physiotherapy has again ramped up its tele-rehabilitation services during the second phase, Ms. Ambrosio says she is heartened by knowing from the survey that patients appreciated what her department achieved. At the same time, she is eager to learn how they feel about the improvements that have since been introduced.

“It’s definitely been a positive experience for everyone,” she says. “It’s also been very rewarding to be able to learn together and know that we can go on helping our patients, even during difficult and unusual times.”