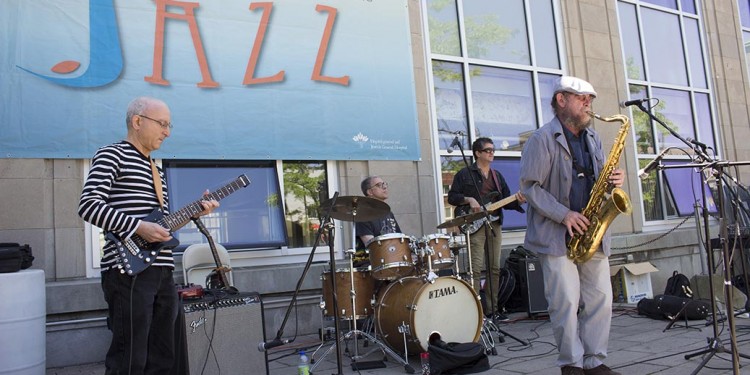 Bryan Highbloom (right), former Music Therapist at the JGH, put in a guest appearance during the most recent JGH Jazz Festival.

The JGH Jazz Festival returned in June for its 18th melodious edition, featuring a week of lunch-hour performances by members of hospital staff and guest musicians. The objective, as always, was to highlight the healing power of music.

Patients, staff and passersby enjoyed the concerts in the picnic area near the Côte-des-Neiges entrance whenever weather permitted. Indoor performances were held on rainy afternoons.

This year’s edition had one significant behind-the-scenes change: For the first time, it was organized by the JGH’s new Music Therapists, Samuel Minevich and Henri Oppenheim.

Until 2016, the festival had been supervised by its founder, Bryan Highbloom, who retired as Music Therapist shortly after last year’s event concluded. However, Mr. Highbloom’s love of music compelled him to return for a guest appearance on June 7, the mid-way point in the festival.

“The Jazz Festival highlights the relationship between the creative arts and the healing process,” notes Mr. Minevich. Mr. Oppenheim adds: “Thanks to the support of the JGH Foundation, we were able to invite the public to share in a positive and inclusive experience that reflects the philosophy and diversity of the hospital.”