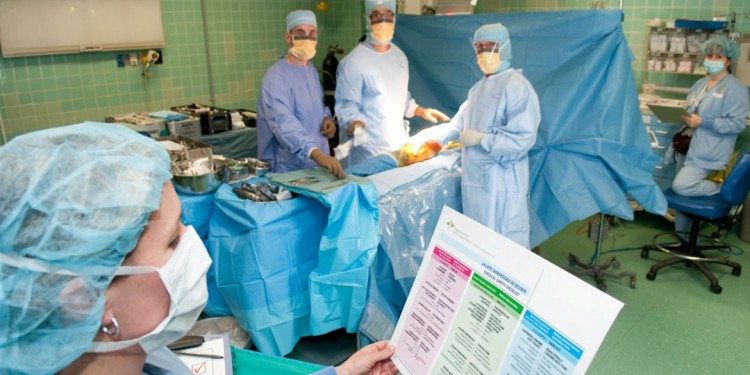 Moments before an operation gets under way in 2010, nurse Anna Pevreal asks Dr. Leonard Rosen (second from right) and members of the surgical team the questions on the JGH Surgical Safety Checklist. Their responses determine that the patient’s medical needs have been met and the operation can proceed safely.

In 2009, the value of a surgical checklist was finally confirmed in research by the World Health Organization and the Harvard School of Public Health. In response to that study, the JGH joined the growing ranks of leading hospitals around the world in 2010 by making systematic safety checks mandatory in all types of surgery.

In doing so, the JGH became the first hospital in Quebec to implement this quick, simple and inexpensive, yet remarkably effective means of preventing errors and raising the quality of surgical treatment.

The JGH’s Surgical Safety Checklist obligates the surgeon and other members of the surgical team to refer to a list of specific topics as they confirm—and, where necessary, discuss—certain key facts about the patient. Reviews are performed at three pivotal moments: before anesthesia, before the first incision, and before the patient is taken to the recovery area.

These procedures, which usually add no more than a minute or two to the operation, ensure that the team is familiar with every pertinent issue relating to the patient’s health and that every necessary precaution has been taken to protect the patient if something unexpected happens.

Also noteworthy is the requirement that everyone in the operating room—from surgeon to scrub nurse to student—identify himself or herself before the first incision is made. The simple act of stating one’s name and job description gives an individual a greater sense of being an active participant whose voice deserves to be heard.

Thus, if a potential problem is spotted—especially by someone in a secondary or minor role—that person will be more likely to speak up, and the possible hazard will be dealt with more quickly and effectively.