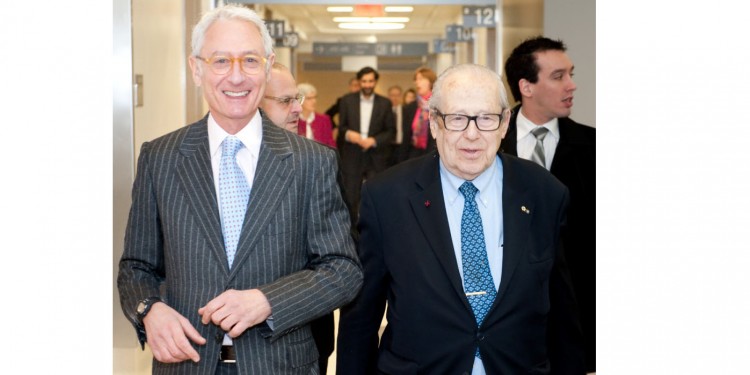 In February 2014, Dr. Victor Goldbloom (right) accompanied Rick Dubrovsky, President of the JGH Board of Directors, on a tour of the newly completed Emergency Department in Pavilion K.

The Jewish General Hospital and the Integrated Health and Social Services University Network for West-Central Montreal would like to extend their deepest sympathies to the family and friends of Dr. Victor Goldbloom, O.C., O.Q., who died on February 15 at the age of 92.

After launching his medical career and practicing at the JGH, Dr. Goldbloom went on to distinguish himself as a Quebec cabinet minister, Canada’s Commissioner of Official Languages and leader of the Canadian Council of Christians and Jews.

In summer 1971, JGH News covered the hospital’s Annual General Meeting, where Dr. Victor Goldbloom delivered the keynote speech about the future of health care in Quebec.

Dr. Goldbloom’s family had deep roots at the JGH: When the hospital opened in 1934, his father, Dr. Alton Goldbloom, was named its inaugural Chief of Pediatrics, having previously served on various committees that planned the development of the JGH. His mother, Annie Goldbloom, was instrumental in creating the Women’s Auxiliary in 1936 and went on to serve as its founding President.

After earning his medical degree from McGill University in 1945 and his Diploma in Pediatrics in 1950, Dr. Goldbloom developed a successful practice in pediatrics, followed by his noteworthy career in politics.

In 1971, he was the keynote speaker at the 37th Annual General Meeting of the JGH, where he foresaw the necessity for consumer-oriented health care. Also predicting the eventual development of the types of healthcare networks that the government launched last year, Dr. Goldbloom suggested that “Quebec must establish constellations in which a variety of institutions with overlapping services will join together to provide all of the health services people seek or require.”

After retiring from politics, Dr. Goldbloom served from 1980 to 1987 as CEO of the Canadian Council of Christians and Jews, and from 1991 to 1999 as Canada’s Commissioner of Official Languages. In addition, he was President of Jewish Immigrant Aid Services of Montreal, Chair of Quebec Jewish Congress, and Chair of the Montreal Health and Social Services Agency.

Throughout his life, he received numerous honours, including Officer of the Order of Canada in 1983 (upgraded to Companion in 2000), the Order of Quebec in 1991, and an honourary doctorate from the University of Ottawa in 1994.

In 2009, the Quebec Community Groups Network established the Sheila and Victor Goldbloom Distinguished Community Service Award to recognize individuals who have contributed to the vitality and understanding of English-speaking Quebec. And in 2012, he was officially recognized by the Vatican for his leadership in promoting inter-religious understanding.

In view of Dr. Goldbloom’s close ties to the JGH and his support for its mission and values, the hospital and West-Central Montreal Health would like to express their deep appreciation for his significant contributions to Montreal’s Jewish community and to all of Quebec society, and for his life-long efforts to find common ground among individuals from a wide array of cultural and political backgrounds and beliefs.

Everyone in the JGH family is saddened by the loss on August 26, 2015, of Dr. Harold Zvy Pomerantz, 93, a veteran staff physician in the JGH Division of Cardiology. Dr. Pomerantz joined the JGH in 1952, and even after retiring from active practice, he continued to visit the hospital regularly to attend conferences, confer with colleagues and pursue studies in the medical library.

In an article in JGH News in 2009, Dr. Pomerantz recalled that when he began his career, the JGH was still a young institution that did not yet have a single full-time, hospital‑based cardiologist.

“What we lacked in technology,” he wrote, “we overcame by practising in a careful, thorough manner and by observing and listening to our patients (although we did have electro-cardiography, X-rays and blood tests to help in the diagnostic process).

“What we knew in 1952, and what must always remain uppermost in our minds, is that every case is not the same, just as every individual is not the same. No matter how much the Division of Cardiology, the Jewish General Hospital and the field of medicine may have changed, the words of that great medical pioneer, Sir William Osler, still ring true: ‘The student starts with the patient, continues with the patient and ends with the patient.’”

It is with deep sadness that the Jewish General Hospital marks the passing on October 25, 2015, of Dr. Mark Adams, 69, a devoted clinician, a valued teacher, a close colleague and personal friend to many in the JGH Department of Psychiatry.

Dr. Adams received his medical degree from the University of Sherbrooke and went on to train in psychiatry at the JGH. After joining the department in 1975, he spent the next 40 years leading the Day Hospital, teaching medical students and residents, and assuming leadership roles in the department and in the medical community.

Dr. Adams was an Assistant Professor at McGill University, also serving as President of the Assembly of Delegates of the Quebec Psychiatric Association and on the Board of Directors of the Federation of Psychiatrists of Quebec.

In a tribute to his colleague, Dr. Karl Looper, JGH Chief of Psychiatry noted that “throughout his career, Mark was known for his compassion, humanistic qualities, sense of humor and, of course, his bowties. He will be greatly missed and remembered by us all.”

It is with great sadness that everyone in the JGH family notes the passing on July 9, 2015, of Dr. Norman Halpern, 93, a staff physician in the JGH Department of Urology for 55 years.

Dr. Halpern studied bacteriology and then medicine at Queen’s University, where he graduated with the Gold Medal in 1948. After completing his residency in urology at Maimonides Hospital in Brooklyn, he returned to Montreal and was appointed to the staffs of the JGH and the Royal Victoria Hospital. He also served as Associate Professor in the Department of Urology at McGill University and was later named Professor Emeritus.

Dr. Halpern, who retired from the JGH in 2007, was known for his warmth toward his patients, his dedication to his work, and his community leadership in his synagogue and in many other causes.

A year with COVID-19: JGH is founding participant in COVID-19 biobank