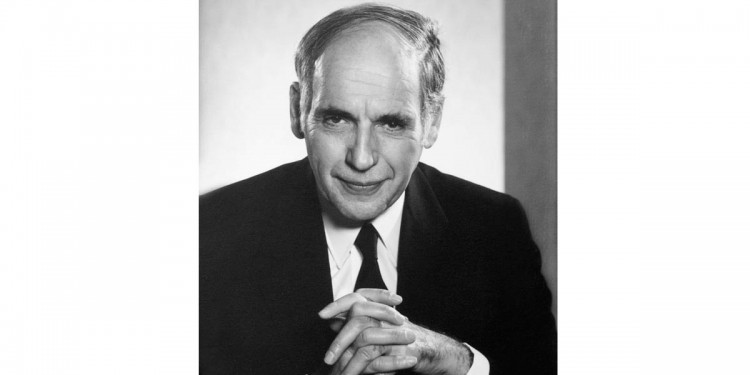 Members of the JGH family mourn the loss on July 14 of Herbert E. Siblin, who served as President of the Board of Directors from 1983 to 1985, and was widely admired and respected as a member of the board for almost two decades.

In 1984, Montreal Mayor Jean Drapeau (right) unveiled a plaque commemorating the 50th anniversary of the Jewish General Hospital. Herbert Siblin, President of the JGH Board of Directors, also showed the Mayor plans for a new western wing.

Mr. Siblin’s dedication to the hospital began in 1970 when, as a chartered accountant, he became involved in advising the JGH on its financial activities. When a serious budget crisis occurred in the ’70s, Mr. Siblin joined the newly formed Budget Control Committee to help steer the hospital into the clear.

As Vice‑President and Treasurer of Sir Mortimer Davis Inc., he was also instrumental in arranging a smooth merger of the Davis funds—which had been bequeathed to the hospital—with those of the JGH Foundation.

Mr. Siblin received his CA degree from the McGill University School of Commerce in 1953 and was awarded the Lieutenant‑Governor’s Medal for highest standing in his class.

He later became the Managing Partner and Chairman of the Executive Committee of Zittrer, Siblin, Stein, Levine, one of the country’s leading accounting firms.

Among his numerous other posts and distinctions, Mr. Siblin was a Fellow of the Order of Chartered Accountants of Quebec, President of the Canadian Club of Montreal, and an appointee by the Quebec government to a special advisory committee studying the future of Crown corporations.

After distinguishing himself in his professional career, Mr. Siblin was named Governor Emeritus and Honourary Treasurer by McGill University, where he had served as a member of the Board of Governors. In recognition for his lifetime of contribution to the community, he was named to the Order of Canada in 2002.

Dr. Kalant dedicated half a century to his career in research, having joined the JGH in 1955 as Assistant Director of Research, and having served as Associate Director of Research from 1962 to 1967. He was Research Director of the LDI from 1969 to 1991, and remained a consultant to the JGH until his retirement in 2005.

Dr. Kalant received his medical degree from the University of Toronto in 1947 and his PhD in Experimental Medicine from McGill University in 1954.

At a farewell party in April 2005, Dr. Norman Kalant was honoured for his 50-year career in research. Here is how three JGH leaders described his contributions:

Dr. Mark Wainberg, Director of Research at the Lady Davis Institute: “Dr. Kalant took the time to mentor every junior scientist who walked through our doors. And I don’t just mean he gave them a friendly pat on the back. He took a true interest in their work and even read their grant applications to point out areas of improvement, so that their work would be described in the best light.”

Henri Elbaz, Executive Director: “He has a beautiful mind for research, and a level of personal and professional integrity that is unbelievably high.”

Archie Deskin, Former Executive Director: “When I first met Dr. Kalant in the late 1950s, he was one of our first physicians devoted almost entirely to research. The hospital owes him a great debt of gratitude for his untiring efforts to create and foster the development of an institution that has added immeasurably to the reputation of the JGH.”

He also completed a Research Fellowship at Tufts University Medical School in Boston (1954-55), and held positions in McGill’s Department of Investigative Medicine as an Assistant Professor (1958-64), Associate Professor (1964-81) and Professor (starting in 1981).

On a personal level, he is remembered by his family for his love of the outdoors, particularly Algonquin Park, where he introduced his children to canoeing and camping. He also had a passion for classical music (particularly Bach), tennis, cross-country skiing, cycling and woodworking.

At a farewell party in the JGH boardroom in April 2005 to mark his retirement, Dr. Kalant thanked everyone “for recognizing what I’ve accomplished. But any one person’s contribution is small in comparison to what we have all achieved together.

“I sincerely hope the hospital continues to distinguish itself in clinical care, academic development and, above all, helping to maintain our health system, which so many people seem ready to give up on.”

It is with great sadness that everyone in the JGH family notes the loss on June 3 of Mona Kravitz, who served as the hospital’s Associate Executive Director (Nursing) from 1996 to 2006.

Ms. Kravitz was best known for having championed the role of nurses as fully participating members of the healthcare team, and for making the JGH a magnet hospital for the recruitment and retention of well-qualified nurses. Her leadership was instrumental in enabling the hospital to achieve a low turnover rate in nursing, contrary to the trend toward nursing shortages world-wide.

In spring 2006, shortly before she retired, Ms. Kravitz was awarded the first Prix Jeanne Mance from the Order of Nurses of Quebec in recognition of her superior leadership and her contribution to the development of nursing and health services in the province.

After receiving her Diploma in Nursing from the JGH School of Nursing, Ms. Kravitz continued her education at McGill University, where she earned her Bachelor of Nursing degree in 1969 and her Master of Science (A) degree in 1973. From 1986 to 1996, she served as Director of Nursing (Medical Services) at the Royal Victoria Hospital. In this capacity, she received the first Physician-In-Chief Award ever given to a nurse. She also taught for many years as Associate Professor in the Master’s program at the McGill School of Nursing.

Ms. Kravitz sat on numerous task forces at the hospital and university level, and served as a consultant to other institutions, such as the University of Manitoba’s School of Nursing, Memorial University in Newfoundland, the Quebec Council for Social Research, and various community and professional groups.

“Visitors see something very special at our hospital,” Ms. Kravitz said at her retirement. “We are more than bricks and mortar; we are a place where members of the staff care about patients and one another. We are responsible to the community of which we are a part.”