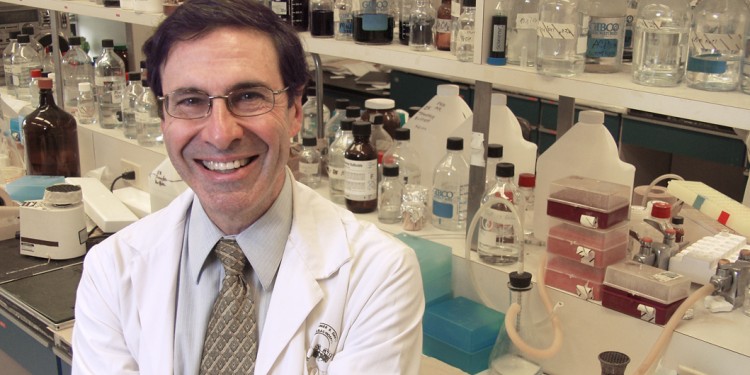 Dr. Mark Wainberg is inducted into the Canadian Medical Hall of Fame.

It is with deep sorrow that the Board of Directors and members of staff of the Lady Davis Institute (LDI), the Jewish General Hospital (JGH) and the Integrated Health and Social Services University Network for West-Central Montreal (CIUSSS West-Central Montreal) mourn the sudden and tragic passing of Dr. Mark A. Wainberg, one of the world’s pre-eminent experts on HIV/AIDS and its treatment.

Dr. Wainberg, 71, who died on April 11 while vacationing in Bal Harbour, Florida, was the recipient of numerous international honours—including the Order of Canada and the Order of Quebec—for his pioneering work, which included the development of a drug that has been instrumental in saving millions of lives around the world.

What motivated Dr. Wainberg was not scientific inquiry alone, but his passion and commitment to helping those affected or endangered by HIV/AIDS. This sense of urgency was particularly evident at international conferences, where the outspoken Dr. Wainberg did not hesitate to criticize governments that he felt could be doing more to fight the disease and help those in need, especially in developing countries.

In fact, Dr. Wainberg’s determination to take an active role against AIDS was so strong that in the early 1980s, not long after the world-wide threat of AIDS gained prominence, he became the first scientist in Canada to work directly on HIV and to establish a bio-containment facility that was equipped to handle this specialized research.

He was also among the first in the world to identify the problem of HIV drug resistance, and he was instrumental in founding the Canadian Association for HIV Research.

This led directly to Dr. Wainberg’s key contribution in 1989 in the discovery of the anti-viral drug 3TC, or Lamivudine, which is combined with other medications to treat the infections caused by the human immunodeficiency virus.

Dr. Mark Wainberg at the 2007 launch of the JGH’s new bio-containment facility for the study of HIV/AIDS.

“We have suffered the tragic loss of not only a world-class researcher, but a colleague and a dear friend,” says Dr. Lawrence Rosenberg, President and CEO of CIUSSS West-Central Montreal. “I’m hard pressed to think of another scientist anywhere in the world who has accomplished so much and devoted so many years to the fight against HIV/AIDS.

“Yet, through all of the many honours and accolades, Mark never rested on his laurels. Instead, he insisted on focusing on his work and pursuing his dream of finding a cure for the disease that has taken countless lives. He will be greatly missed.”

“He was a giant,” agrees Dr. Gerald Batist, Acting Director of the Lady Davis Institute. “We are left with a hole in our hearts, in our LDI community and in the world of HIV science. The HIV-related world also misses one of its most powerful advocates.”

Dr. Mark Wainberg before the 16th International AIDS Conference in Toronto in 2006, which he co-chaired.

A native Montrealer, Dr. Wainberg was a Professor in the Departments of Microbiology and Immunology, Pediatrics, and Medicine at McGill University. He received his Bachelor of Science degree from McGill and his Ph.D. from Columbia University in New York. After working at the Hebrew University Hadassah Medical School in Jerusalem as a post‑doctoral research fellow and lecturer, he joined the LDI as a staff investigator in 1974.

Once AIDS took root on a global scale in the early 1980s, Dr. Wainberg did not hesitate to make his views known. “This disease is the latest epidemic to have afflicted mankind,” he wrote in the autumn/winter 1985 issue of JGH News (see page 9 in the pdf). “Its presence in our society demonstrates all too clearly how we have taken the conquest of infectious diseases too much for granted.”

Dr. Wainberg served as President of the International AIDS Society from 1998 to 2000, with responsibilities that included organizing the 13th International Congress on AIDS in Durban, South Africa, in 2000. He also co-chaired the 16th International AIDS Conference in Toronto in 2006, where he publicly challenged the Canadian government to support global efforts to fight AIDS.

At a 2009 reception, on stepping down as Director of the Lady Davis Institute, Dr. Mark Wainberg is thanked for his service by Dr. Hartley Stern, Executive Director of the JGH.

“Now that we can treat AIDS, we have to contend with growing complacency,” Dr. Wainberg stated in 2013 (see page 17 in the pdf). “The fact that many people live for decades with HIV means it costs billions to provide the necessary drugs. This is not sustainable, so the need for a cure is as pressing as ever.”

Dr. Wainberg carried such considerable weight in HIV/AIDS research that in 2007, he was instrumental in enabling the JGH to build a new bio-containment laboratory in the LDI (see page 11 in the pdf), at a cost of $5 million.

At the time of its inauguration, the lab was among the few level 3 facilities in a Canadian hospital, with strict safety precautions enforced by Health Canada. It was also one of only two Quebec centres authorized to check the genetic sequence of the virus to determine whether it had mutated and become resistant to anti-viral drugs.

At the JGH Long Service Reception in 2015, Dr. Mark Wainberg received his certificate for having completed 40 years of service in 2014.

Although research consumed most of Dr. Wainberg’s time, he was also deeply moved by the plight of individuals. For example, in January 2016, he visited Jerusalem for the dedication of a Torah scroll that he donated in memory of 16-year-old Shira Banki, who was stabbed to death in July 2015 during the city’s annual Gay Pride Parade. Dr. Wainberg said he was moved to make the donation after hearing about the death of Ms. Banki, a high school student who attending the parade to show solidarity with her LGBT friends.

Among Dr. Wainberg’s many honours were:

In observance of Dr. Wainberg’s passing, the McGill flag was lowered to half-staff at the JGH.

The Board of Directors and staff express their heartfelt condolences to the family of Dr. Wainberg and to his many friends and colleagues in Montreal, throughout Canada and around the world.

Dr. Wainberg will be remembered for his his scientific insight, his commitment to his work, his dry wit and his deep desire to bring relief and hope to those in need.

Words of praise and condolence

In the days and weeks following the sudden and untimely death of Dr. Mark Wainberg, more than 300 condolence messages from friends, colleagues and students—past and present—appeared on the website of Paperman & Sons, funeral directors.   Except where indicated, here are excerpts from some of those messages:

Barbara and Dr. David Zukor, JGH Chief of Orthopedics: “Mark was so accomplished in so many ways, but above all, he was always down-to-earth, kind, smiling and warm. He was true mensch (honourable person) who leaves this world much too soon, but with the best possible shem tov (good name).”

Barbara and Stanley K. Plotnick, Past President of the JGH Board of Directors: “He was a friend and mentor, and always enlightened me not only about medicine, research, our hospital and education, but about being a caring Jew and a mensch.”

Dr. Alan Spatz, JGH Chief of Pathology: “Mark was an outstanding and compassionate researcher whose work and vision saved hundreds of thousands of lives—a fantastic man, always standing for what he believed was right, and a generous leader interacting with kindness and humour with his colleagues.”

Dr. John Hiscott, Adjunct Senior Investigator of Molecular Oncology and Virologya the LDI: “Mark was my mentor and friend for 30 years. As with many other students and colleagues, he was always a supportive, generous and helpful mensch, full of practical advice that was sometimes spoken with such force and volume, that you had to sit up and take notice! It was usually followed by that wide smile that said, ‘Take me seriously, but not that seriously.’”

Susan and Jonathan Wener, Past President of the JGH Board of Directors: “Mark was highly regarded not only for his work, but for his kindness and generosity of spirit. As board members we were privileged to have him share his work and insights.”

Dr. David Eidelman, Dean of the Faculty of Medicine and Vice-Principal of Health Affairs at McGill: “Mark Wainberg has had an inestimable impact on the lives of millions of people through his transformative research and his extraordinary advocacy. The world has lost a medical giant, an exceptional mentor and a great man.” Quoted in The McGill Reporter.

Salim and Quarraisha Abdool Karim, researchers: “When we worked with Mark and Jerry Coovadia on the AIDS 2000 conference in Durban, little did we know how much it would change the world, and it continues to do so. It became a reality due, in no small part, to Mark’s tenacity and commitment.”

Mitchell Brownstein, Mayor of Côte St-Luc: On behalf of my wife, Elaine, and the City Council of Côte St-Luc, we mourn the sudden passing of Mark. As an active member of our community, as Past President of Congregation Tifereth Beth David Jerusalem, and as a volunteer in so many endeavours, he will be remembered fondly, with the greatest admiration, but most importantly, as a regular guy who was totally involved in the conversation of the moment—interested, compassionate and encouraging the person with whom he was speaking.”

Suzanne Fortier, McGill’s Principal and Vice-Chancellor: “Dr. Wainberg was a pioneer, both in the laboratory and on the front lines. He was not afraid to speak his mind. Millions of lives have been saved because of his deep caring, his progressive social conscience and his scientific brilliance.” Quoted in The McGill Reporter.

Dr. Lorraine Chalifour
, Assistant Director for Graduate Students and Senior Investigator at the LDI: “Mark was bigger than life. He was the complete package—outstanding and passionate about his science, a world-beating humanist who thought and acted on his beliefs no matter the politics, as well as warm, funny and engaged completely with whomever he was with.”

Dr. Jerry Zaharatos, LDI Investigator and Attending Staff at the JGH: “Mark was beyond generous with his advice, encouragement and support on my path in HIV science and medicine, and I will be forever grateful. His enthusiasm could only be described as childlike, and his mischievous smile and humor only added to his youthful aura. His passion for science could only be eclipsed by his kind heart and generous spirit. The magnitude and breadth of his contributions, both in science and advocacy, and his mission to make this an AIDS-free world will impel us all to keep up the struggle.”