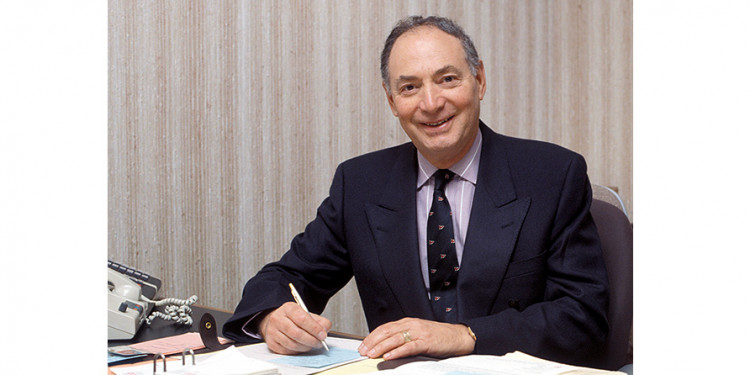 Archie Deskin, Executive Director of the Jewish General Hospital from 1975 to 1991.

It is with great sadness that the Jewish General Hospital notes the passing on September 5 of Archie Deskin, 95, who was instrumental in guiding the hospital into the modern era as Executive Director from 1975 to 1991.

Mr. Deskin also distinguished himself in his leadership role with the elderly, having served as President of the Maimonides Geriatric Centre and as Executive Director of the institution that preceded Maimonides.

Dramatic growth and expansion were the hallmarks of Mr. Deskin’s term as Executive Director of the JGH and, in a broader sense, his entire career at the hospital. 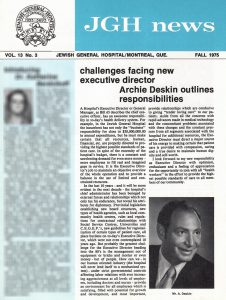 Shortly after being appointed Executive Director of the JGH in 1975, Archie Deskin spoke with JGH News and described the challenges that lay ahead. (Click to enlarge.)

In fact, he frequently stated that one of his proudest achievements was leading a $21 million renovation and expansion project in the 1960s when he was the hospital’s Administrative Assistant. That project resulted in, among other things, construction of the Lady Davis Institute and the Institute of Community and Family Psychiatry.

Highlights of his term as Executive Director included the launch of the Neonatal Intensive Care Unit, creation of the Division of Geriatric Medicine, the founding of Hope & Cope, the opening of Pavilion E, and the designation of the JGH as a McGill University teaching hospital.

Mr. Deskin’s term was also marked by economic uncertainty and major budgetary difficulties, which he helped the JGH navigate, enabling the hospital to emerge stronger than ever.

In fall 1975, just after being appointed Executive Director, he told JGH News that he saw his chief obligation as ensuring that “patient care is provided with compassion, caring and a true desire to maintain human dignity and self-worth.

“[I would also like] to provide an environment for all employees that is satisfying, filled with potential for growth and development, and most important, to provide relationships that are conducive to giving tender loving care to our patients.”

Born in Montreal, Mr. Deskin followed the example of his father, Nathan Deskin, in dedicating his life to the needs of the Jewish community and the public. In the 1930s, Nathan was President of the Montreal Hebrew Old People’s and Sheltering Home (Maimonides’ predecessor) and, from 1940 to 1957, its Executive Director.

Archie launched his career by joining the institution as Assistant Executive Director in 1953 and continuing as Executive Director from 1957 to 1960. At the same time, he completed his post-secondary studies, earning a B.A. in 1957 from Sir George Williams University and his M.A. in hospital administration in 1960 from the Institut supérieur d’administration hospitalière at the Université de Montréal. 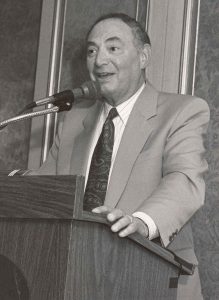 In 1993, the Department of Nursing established the Archie Deskin Scholarship, to acknowledge his contribution to the hospital, while recognizing his dedication to post-graduate education. The scholarship is awarded each year to a dynamic nurse who wishes to develop her or his leadership capabilities through higher education.

After his retirement, Mr. Deskin continued to assist the hospital in an advisory capacity, as well as turning his attention to Maimonides, where he was President of the Centre Board from 2003 to 2006.

“Archie was a gentleman, a real prince, so humble and a down-to-earth person,” said Henri Elbaz, who succeeded Mr. Deskin as Executive Director of the JGH.

In a posting on the website of Paperman & Sons, Mr. Elbaz noted, “We worked very closely together for 15 years until his retirement. He did so much for the hospital and the community. We owe him a debt of gratitude.”

Barbra Gold, who retired in 2021 as Director of the Support Program for the Autonomy of Seniors, worked closely with Mr. Deskin at both the JGH and Maimonides, and considers as a mentor.

She said his insights were invaluable to Maimonides, especially in light of his long family history with the institution. This was of great benefit in modernizing Maimonides, which meant bringing the building up to date and strengthening relations with the government.

In 1992, not long after his retirement from the JGH, Mr. Deskin reflected on his career at the JGH, telling JGH News that the pressures of the job were not only manageable but ultimately rewarding, thanks to “our superb hospital family. It was this collaborative effort that has brought the hospital to its present position.”