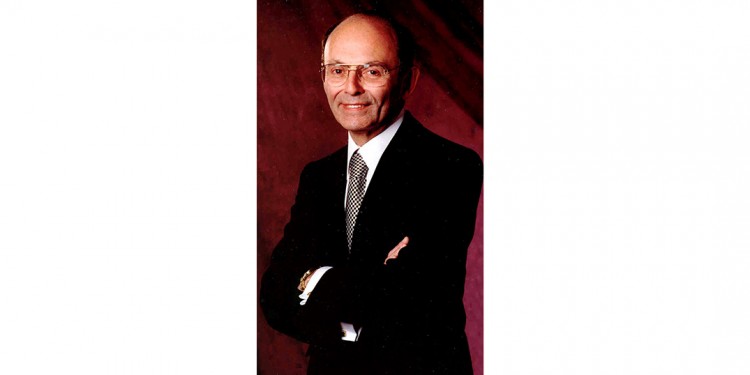 Statesman and businessman led JGH Board in late 1990s

The leaders and staff of the Jewish General Hospital and CIUSSS West-Central Montreal are deeply saddened by the passing on January 9 of Senator E. Leo Kolber, a distinguished statesman, businessman and lawyer, who served as President of the JGH Board of Directors from 1997 to 1999.

Upon receiving the hospital’s Distinguished Service Award in 2003, Senator Kolber stated that he had dedicated so much time and effort to the institution, because “my involvement in the Jewish General Hospital has allowed me to pay back the largesse that this country gave me.”

Senator Kolber, who died at the age of 90, is credited for having guided the JGH through a period of considerable difficulty and change in the healthcare system. He was firm in his defence of the hospital and he considered access to high-quality healthcare services to be a non-negotiable issue.

In 2009, he received the JGH’s Lifetime Achievement Award, acknowledging his achievements not only as President, but as Vice-President of the Board from 1995 to 1997 and President of the JGH Corporation from 1983 to 1985. As a committed supporter of the JGH until his passing, Senator Kolber could often be seen walking the halls of the hospital until recently.

In business, Senator Kolber was perhaps best known as a guiding force in the Cadillac Fairview Corporation, one of the world’s leading real estate developers, which was responsible for such landmark buildings as Toronto’s Eaton Centre and Vancouver’s Pacific Centre. He was also Chairman of Claridge Inc., a Montreal-based company that was privately managed for the Bronfman family.

In addition, Senator Kolber served as President of CEMP Investments, the business arm of the trusts established by Samuel Bronfman, which concentrated on developing real estate in Canada, the United States and Europe.

In the political sphere, his appointment to the Senate of Canada came in 1983, which led to his membership on the Committee on Banking, Trade and Commerce. He also served as Chairman of the National Revenue Committee of the Liberal Party of Canada.

Senator Kolber graduated from the McGill University Faculty of Law and was called to the Quebec Bar in 1952. In 1996, he received a degree of Doctor of Laws Honoris Causa from Concordia University, and in 2007, he was named an Officer of the Order of Canada.

Active in many social, cultural and philanthropic organizations, he took a leadership role in, among others, Combined Jewish Appeal, State of Israel Bonds and the Jewish Rehabilitation Hospital.

In recognition for Senator Kolber’s enduring support of the JGH, the flags at the hospital’s front entrance were lowered to half-staff.

Condolences are extended to Senator Kolber’s wife, Ronith Hirsch-Kolber; to his daughter, Lynne, and son, Jonathan, the children of the late Sandra Maizel, as well as their spouses and children; and to his brother, Samuel Kolber, and his family.

Dr. Philip Gordon honoured for a lifetime of excellence in colorectal surgery