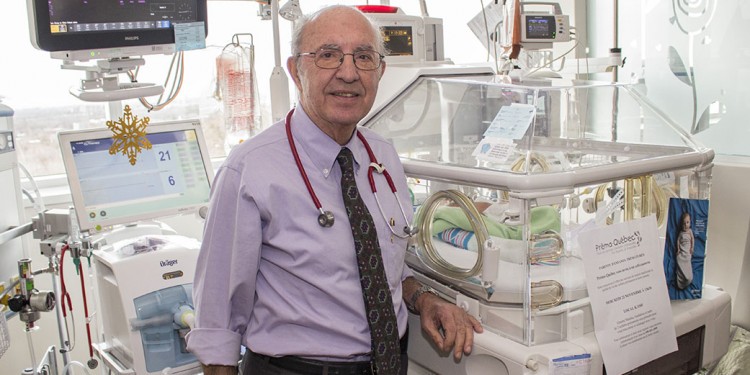 Dr. Apostolos Papageorgiou, the JGH’s Chief of Pediatrics and Neonatology, has been honoured with a prestigious international award from the World Association of Perinatal Medicine.

Dr. Papageorgiou has won the Erich Saling Prize in recognition for his contributions to perinatal care. He was presented with the award on September 11 at the 14th World Congress of Perinatal Medicine in Istanbul, Turkey.

The prize is bestowed each year on scientists from around the world who are currently among the best in the field of perinatal medicine.

“I’m really pleased to receive such an honour,” says Dr. Papageorgiou, “and I’m grateful for this international recognition.”

Dr. Papageorgiou, a Professor of Pediatrics, Obstetrics and Gynecology at McGill University, is regarded as an expert in the care of extremely low birth-weight infants. He has been the recipient of numerous awards, including McGill’s Osler Award for outstanding teacher and the Prix Letondal from the Quebec Association of Pediatricians for his contribution to the health of infants.

“We are truly fortunate that a physician of Dr. Papageorgiou’s international stature has chosen to devote his 45-year career to patients of the JGH and our CIUSSS,” says Dr. Lawrence Rosenberg, President and CEO of CIUSSS West-Central Montreal. “He has our warmest congratulations not only for this latest award, but also for having saved the lives of countless premature infants whose chances for survival seemed all but hopeless.”

Dr. Papageorgiou notes that his colleagues, the team’s nurses and members of JGH staff deserve to share credit for the prize. “I’m proud for the hospital and for McGill, because this is also an honour for the institutions where I work,” Dr. Papageorgiou says. “To excel, you need a great environment.”

From the archives: The abduction of James Cross