From the archives: Introducing … Dr. Robot! 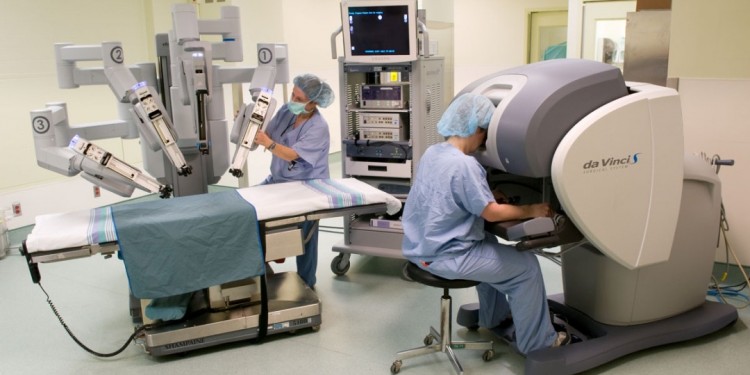 Members of staff demonstrate the components of the da Vinci Surgical System. During an operation, the patient lies on the surgical table (left), and robotic arms, each equipped with a tiny surgical tool, extend into the patient’s body. The operation is performed by a surgeon at a special console (right) connected to the robot. Surgery is monitored by electronic equipment on a separate cart (centre). During an operation, the robot and its arms—but not the surgeon’s console—are covered in sterile plastic sheeting.

Robot-assisted surgery, the most exciting and revolutionary form of surgery ever performed at the JGH, got under way in December 2007.

Dr. Guy Breault, a urology resident, assists in robotic surgery. To keep the area hygenic, plastic sheets encase all of the machinery except for the sterile instruments in the patient’s abdomen.

Earlier versions of the da Vinci robot had been used in the United States and Europe for several years. However, the model that the JGH introduced was the most advanced of its kind, purchased by private donation for $4.5 million. As of spring 2008, the only other Canadian cities boasting this level of robotic sophistication were Vancouver, Edmonton and Toronto.

In the da Vinci system, the robotic arms—each bearing its own instrument—are passed through the incisions and into the patient’s body. The surgeon, sitting a couple of metres away at a special console, uses hand controls and foot pedals to manipulate the robotic arms with a degree of precision that can be difficult to achieve in regular laparoscopic surgery.

From the archives: What every good nurse should know