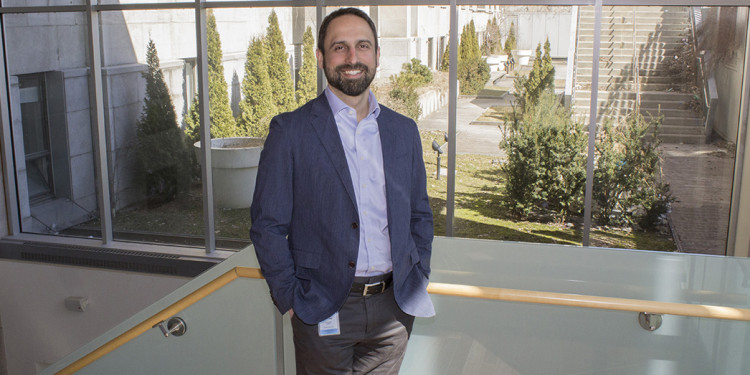 To improve the quality of health care and social services, and to ensure that clinical staff have prompt access to accurate health-related data, an ambitious project has been launched to develop an innovative, next-generation electronic health record for CIUSSS West-Central Montreal.

Known as the Connected Health Record (CHR), this complex, multi‑year undertaking will make consistent, updated information about each user easily available to staff on a single digital platform at all CIUSSS sites.

To explain the need for the CHR and the challenges that lie ahead in implementing it, Dr. Justin Cross, the CIUSSS’s Chief Digital Health Officer, discussed the project during a wide-ranging Q&A session.

In this opening installment, Dr. Cross provides an overview of the CHR mega-project.

Q: Overhauling the way health records are stored, consulted and updated in CIUSSS West-Central Montreal will be extremely complicated. Why embark on such an ambitious project?

Dr. Justin Cross: We need to keep improving care, and this means we need to replace the antiquated and inefficient system of health records that members of our staff now work with.

The current system is composed of many separate self-contained systems that have grown too old and have difficulty interfacing with one another. This can make it harder and more labour-intensive for staff to find the information they need and to share that data among various CIUSSS sites.

Not only are these systems old, there’s often more than one of them at some sites, depending on the tasks that need to be performed. And at a few sites, the process is largely paper-based.

In practical terms, how does this outdated patchwork of systems create difficulties?

Let’s take the case of a doctor at the Jewish General Hospital. In a typical day, the physician might need to use one computer system to write notes about a patient’s progress, another to order medication, and yet another to view the patient’s x-rays.

Similarly, ordering a blood test could require the doctor to write an order that’s entered into one system, with the results available later in another system.

“Physicians are wasting a couple of hours every day just waiting for various computer systems to respond.”

This juggling act can be confusing and frustrating—something that no doctor or healthcare professional should have to put up with.

Then consider the time factor. As a physician at the JGH, let’s say you see 20 patients on an average day. For each patient, you might have to open anywhere from five to seven separate programs, each of which might need a minute or more to load the data you want to review.

Multiply that minute by six or seven and then by 20, and you discover that the physician is wasting a couple of hours every day just waiting for these various computer systems to respond.

Then there’s the matter of efficiency—or, more precisely, the lack of it—because of the paper records I mentioned earlier. Doctors and other staff often waste a lot of time searching for the physical binders where the patients’ paper charts are kept.

What will be the impact of the CHR on patients and other healthcare users?

Uniformity of information and its easy availability are fundamental to the safety of healthcare users and the quality of their care. When all of the data about each user is eventually centralized in the CHR, the care teams will have the most accurate and up-to-date information at their fingertips, making it easier for them to arrive at thoughtful, well informed decisions.

Our plan is for the CHR to make more use of a feature that’s known as clinical decision support, which now exists in the computer system that manages medication at the JGH. If a clinician tries to fill a prescription that calls for a particular drug to be given to someone who’s allergic to it, the computer issues a warning that tells the clinician not to proceed.

“The CHR will also have a significant impact on the user experience.”

We intend the CHR to have that same high level of support, but with a wider scope that goes beyond simple medication interactions.

For instance, the CHR might issue a message to a member of staff that says something like, “Since your patient has diabetes, she should be getting such-and-such medication. And since her kidney function is at such-and-such a level, you should be prescribing a lower dose. And, by the way, she still hasn’t had the x-ray that was ordered for her.”

When all of the information is finally collected into one uniform system, patients will no longer have to keep repeating themselves, even though they sometimes may be asked to verify basic information for safety purposes.

Why is this multi-site inter-connectedness so important?

Because in many instances, the healthcare journey calls for care to be provided at more than one facility or site. Thus, it’s essential to have good communication among all sites.

For instance, imagine that you’re a member of staff at a long-term care centre and you need to know what happened the last time a certain resident was taken to the JGH for treatment.

Or you might be a social worker in the community and you want to inform the JGH’s care team about a particular patient’s social circumstances, in order to properly plan the patient’s discharge. The CHR will make this kind of interaction easier, faster and more efficient.

The CHR is intended to break down silos among staff at our network’s various sites. The more easily information can be shared, the more effectively staff can cooperate in providing care of superior quality.