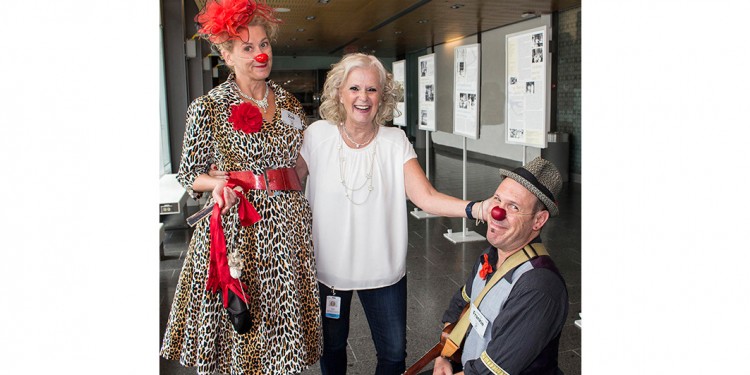 Nancy Rubin, Director of the JGH Auxiliary, with members of Dr. Clown, Zoé (Michele Sirois) and Frankie (Jean-François Leblanc). The Auxiliary raises funds that enable patients and staff to enjoy the troupe’s therapeutic humour on a weekly basis.

In his novel The World According to Garp, John Irving made an insightful observation that nicely describes my unexpected path to The JGH Auxiliary: “You only grow by coming to the end of something and by beginning something else.”

My end—or rather, what was supposed to be the conclusion of more than 35 years in the work force—came in 2006, when I decided to join my husband, Donny, in a well deserved retirement. Then fate intervened and I realized that, in fact, I was on the brink of, as Irving says, “beginning something else.”

To my surprise and delight, my position as Director of The Auxiliary has given me a precious opportunity to help others, while continuing to grow. For 12 years, I’ve been privileged to be part of a dedicated team of generous volunteers and top-notch professionals whose desire is to make life better for patients in our hospital.

I can’t say I had a specific career goal when I was younger. In high school, my interests were all over the map, and in the mid-1960s, there was no CEGEP to promote self-discovery in an academic setting.

What I did know was that community organizations were where I belonged. My parents, Beatrice and Saul Glassman, had leadership roles in our synagogue and other community groups, and their influence clearly rubbed off on me.

By the late 1960s, I had completed a marketing and public relations program at McGill University, and found summer jobs in a law office and at Dun & Bradstreet, where I conducted research into various companies. That set the stage for a series of fascinating and rewarding challenges over the coming decades.

“It’s gratifying to honour the legacy and values that have existed at The Auxiliary since it was founded in 1936.”

One particular highlight came in the mid-’90s, when I spent a year at McGill as a Project Director organizing the International Forum for Child Welfare. This remarkable five-day conference on legal advocacy for children brought together more than 200 delegates from over 30 countries. Planning it proved to be quite a task, since it meant staying in touch with global contacts in an era when email was rare and even faxes were uncommon.

“Memorable” was also the word for my four years as National Executive Director for Maccabi Canada, preparing for our country’s participation in the 16th Maccabiah Games in Israel in 2001. After working intensively with coaches, athletes, parents and planners, it was a genuine thrill to walk into the opening ceremony at the Ramat Gan Stadium alongside Jewish participants from around the world!

And speaking of sports, one of my fondest memories comes the Yaldei Developmental Centre, where I was Director of Development from 2002 to 2006. In supporting children with special needs, my team and I worked with the Montreal Canadiens’ Children’s Foundation to buy an 18-seat school bus. For the grand unveiling, we filled it with Canadiens alumni and when it pulled up to the school, the first person to step out and greet the kids was Jean Beliveau.

Then Evy Uditsky, a good friend and Past President of The Auxiliary, transformed my life by strongly encouraging me to apply for the position of Auxiliary Director in 2006. At first, I was reluctant, because retirement was beckoning and I’d already turned down offers from other organizations. But Evy was so persistent and persuasive that I thought, “Why not? I still have a few good years left.” Lo and behold, I got the job, and Evvy was right: It’s been a perfect fit.

Every night, I go home feeling that what we’ve all accomplished together really matters. It’s also gratifying to honour the legacy and values that have existed at The Auxiliary since it was founded in 1936. Some of our programs, like Dr. Clown, raise the spirits of patients and staff. Others provide the hospital with much-needed equipment—notably, our Tiny Miracles program, which supports the Neonatal Intensive Care Unit.

Do I regret not having retired all those years ago? Not for a moment. Look at what I would have missed! As John Lennon so aptly put it in one of his songs, “Life is what happens to you, while you’re busy making other plans.”