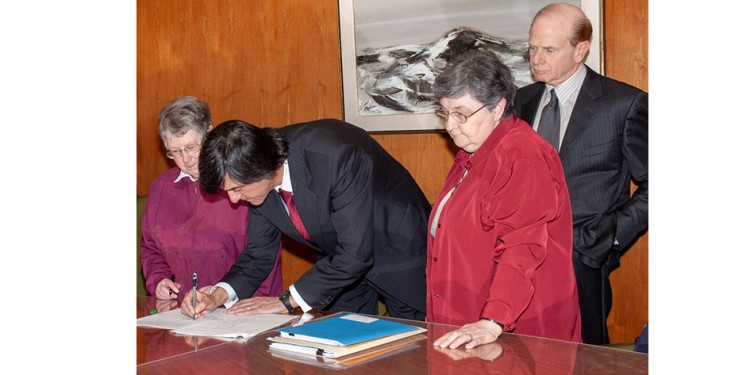 The much-needed expansion that the JGH has undergone during the first two decades of the 21st century would not have been possible without a pivotal event that took place on February 1, 2005: the purchase of nearly six acres of land and two buildings from Les Soeurs de St. Croix (Quebec Region), an educational order of nuns.

The property just north of the hospital, stretching from Côte‑des-Neiges to Légaré, enabled the hospital to convert the convent into Pavilion H, while providing the land on which to build Pavilion K.

At a historic signing ceremony in the hospital boardroom, JGH President Stanley K. Plotnick expressed his deep appreciation to Les Soeurs de St. Croix and said the hospital has been “blessed to have neighbours who care so deeply about people and their welfare. When the time came to sell, they knew the right thing to do was to serve the people of Quebec. Making money was never a consideration in their minds.”

The agreement marked the culmination of a warm relationship that existed for decades between the JGH and Les Soeurs de Sainte-Croix. During occasional social visits over the years, the JGH expressed an interest in buying the land and asked to be the first to be offered the property whenever the Sisters felt they were ready to sell.

In 2002, the Sisters informed the hospital that they were ready to sell the property and a special letter authorizing this transaction was issued by the Vatican.

“We are very happy to sell the property to the hospital, because it serves the population,” said Sister Annette Legault, Regional Director of Les Soeurs de Sainte-Croix. “We refused offers to build condominiums because we wanted to serve the community.”

“This was a very big step for us,” agreed Sister Thérèse Lefrançois, Treasurer of the Order. “We’ve owned the property since 1928 and it’s part of our history. Now we’re losing that aspect of our history, but for a good cause.”

Jonathan Wener, the hospital’s Immediate Past President, called the purchase “one of the most important transactions the JGH has completed since the days when the hospital’s founders bought the land that the hospital now sits on.”

“Dear diary: The situation is still serious, but there’s hope … ”