For the second year in a row, a survey for Newsweek magazine [1] has ranked the Jewish General Hospital as the top healthcare facility in Quebec and among the top five in Canada.

The second annual ranking was undertaken as part of a broader look at hospitals around the world. The magazine surveyed 21 countries, including Canada, the United States, Germany, Switzerland, Singapore, Israel and Sweden. 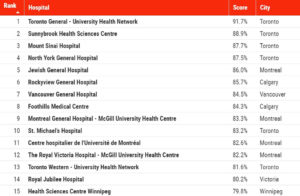 Newsweek’s ranking of the top 15 hospitals in Canada. (Click to enlarge)

The rankings are based on recommendations from medical professionals, results from patient surveys and key medical performance indicators.

“It is extremely gratifying that the JGH has again been named the leader in Quebec and among the best in Canada,” says Dr. Lawrence Rosenberg, President and CEO of CIUSSS West-Central Montreal.

“In whatever success we achieve on behalf of our patients, the credit belongs to members of our staff in all fields, as well as our generous donors and dedicated volunteers.

“For more than eight decades, the hospital has been a beacon of diversity and inclusion, having been founded to provide care and employment to people of all backgrounds. Its non-discrimination policy was among the first in Quebec, serving as an example for other institutions to follow in the public and private sectors.

“The JGH has also been tireless in its efforts to provide patient-centred care that is instilled with compassion and attention to the emotional needs of patients and their families. At the same time, staff continuously strive to improve quality through technological innovation and scientific research.

“These qualities are intrinsic to all of the facilities that deliver health care and social services in our CIUSSS.”

The survey was conducted by Newsweek in partnership with Statista Inc., a global market research and consumer data company.