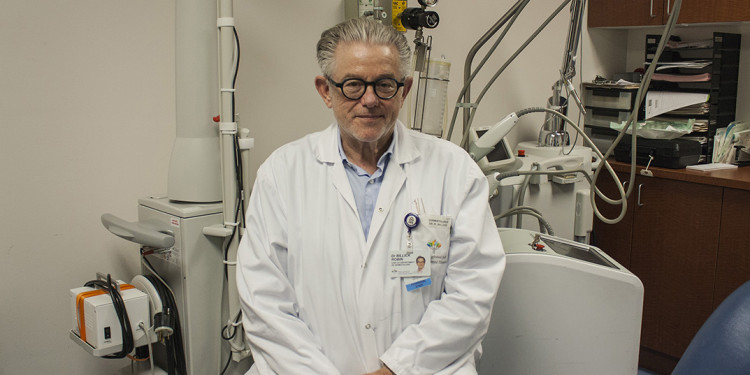 Dr. Robin Billick, Chief of Dermatology, in one of his Division’s examination rooms at the JGH. (Click on photo to enlarge it.)

Dr. Robin Billick recognized for his 43 years of outstanding service

Dr. Robin Billick, who has been JGH Chief of Dermatology since the Division was created in the mid-1980s, is being honoured by the Israel Cancer Research Fund (ICRF) for his decades of distinguished service in diagnosing cancer and saving lives.

His work will be acknowledged at the ICRF’s 45th Annual Gala on June 7 at Jardin Royalmount, where a plaque will be presented with the following inscription: “In grateful appreciation to our 2022 honouree, Dr. Robin Billick, for your dedication and commitment to saving lives in our fight against cancer.”

“It’s very gratifying to be recognized in this way,” says Dr. Billick, who joined the JGH in 1979. “I figure I save about 60 to 75 lives each year, because that’s the number of melanomas I diagnose.

“I don’t think I’ve overestimated those numbers, but even if you put them at a conservative 50 per year, that’s still easily 2,000 lives in a career that’s lasted over 40 years. It’s a source of great pride and satisfaction that I’ve been able to make this kind of contribution.”

“ICRF is proud to have chosen Dr. Billick as our honouree this year,” says Jordanna Feifer, President of ICRF Montreal. “We felt it was a long time coming, for all of his years of hard work and dedication. Dr. Billick’s commitment to cancer prevention and early detection have saved countless lives. He is a leader in our community and in the medical field, and we can’t think of anyone more deserving.”

“Dr. Billick is a leader in our community and in the medical field, and we can’t think of anyone more deserving.”

“Our mission is to fund the best and brightest Israeli scientists in their ground-breaking cancer research,” notes Stu Guttman, ICRF’s Chief Executive Officer. “Dr. Billick is a wonderful honouree who possesses all of the qualities a medical practitioner should strive to emulate. It is our sincere hope that together we will end the suffering caused by cancer.”

Dr. Billick says he also makes a point of suggesting to his patients— gently and with a certain amount of humour—that they consider making a donation to support cancer treatment and research.

“I don’t push people, but I do say something like, ‘If you happen to have an extra million dollars lying around that you don’t need, that’s great, we’ll take it,’” he chuckles. “‘But if you only have $18 (a lucky Jewish number), that would wonderful, too. Whatever you can do would be appreciated.’

“We’ve been able to raise quite a lot of money this year—almost half a million dollars. I’m very proud of that. If everybody steps up and gives what they can, we can all make a big difference together.”

Once cancer has been diagnosed, Dr. Billick explains, treatment can be administered using drugs and procedures that are far more advanced than when he launched his career.

“When I started, we were treating metastatic melanoma with surgery and some pretty terrible types of chemotherapy that knocked people out and destroyed their immune system.

“If everybody steps up and gives what they can, we can all make a big difference together.”

“But now we have monoclonal antibodies, which are very effective in suppressing melanoma. We can even tissue-type the melanoma to select the therapy that the patient will best be able to respond to.”

In addition, Dr. Billick has been instrumental in establishing a skin cancer clinic at the JGH that’s staffed by medical specialists in various cancer-related fields—the only such multi-specialty clinic in Quebec.

“Normally, as a patient, you’d see one specialist; here your case is reviewed by a group of six specialists. They’re here twice a month for the melanoma clinic and three times a month for non-melanoma skin cancer such as squamous cell cancer and other malignancies.

“As a result, patients have benefited by getting an opinion not from a solitary doctor, but from a group of sophisticated physicians. This significantly increases the likelihood that an appropriate therapy will be selected.”

With a laugh, Dr. Billick says he’s aware that dermatology is sometimes perceived as less glamorous than other specialties and that “a dermatologist might be seen as a sort of Rodney Dangerfield of medicine: We don’t get no respect.

“But when people need us, we’re there and we’re always ready to help. Patients sincerely appreciate what we do and I’ve been touched by the respect and gratitude I’ve felt from them throughout my career.”