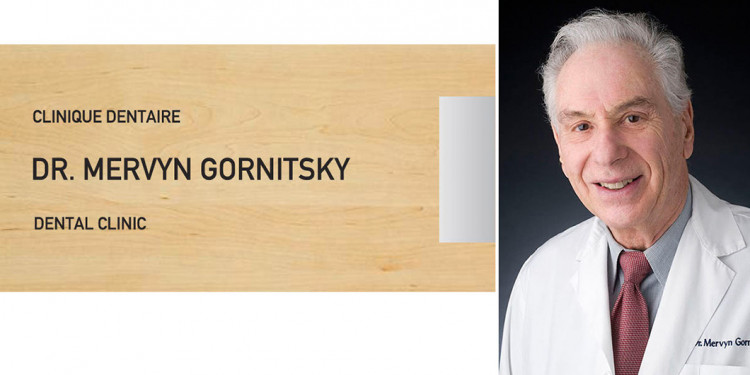 Dr. Mervyn Gornitsky and the plaque that honours him in the JGH Dental Clinic.

If you’ve received a dental implant in Montreal sometime in the past 35 years, you can thank Dr. Mervyn Gornitsky for helping to make it possible. 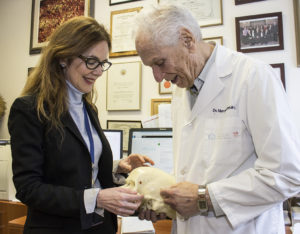 In 2018, Dr. Mervyn Gornitsky used a model of a human skull to discuss research into dental pain with Dr. Ana Velly.

If you’ve had a tooth extracted at the JGH despite the potential complications of oral cancer or HIV/AIDS, chances are the procedure relied on techniques that Dr. Gornitsky was instrumental in developing.

If you’re counting on researchers to steer us through the COVID-19 pandemic, a key role will most likely be played by Canada’s largest saliva biobank, which Dr. Gornitsky was pivotal in establishing at the JGH.

Given these and other accomplishments, plus the fact that Dr. Gornitsky celebrated his landmark 90th birthday in 2020, the JGH Dental Clinic has been renamed in his honour. The change became official on December 16, with the installation of a plaque.

The JGH Foundation is also recognizing him by planning a fund-raising event this spring, with proceeds supporting the development of the Department of Dentistry.

“This is such a wonderful gesture,” says Dr. Gornitsky, who served as JGH Chief of Dentistry from 1971 to 1998 and now holds the title of Emeritus Chief of the department. “I’m so proud of this legacy. I spent a good part of my life developing the department.”

In 1971, Dr. Mervyn Gornitsky’s appointment as Chief of the Department of Dentistry was announced in JGH News. (Click on photo to enlarge it.)

McGill University’s Faculty of Dentistry has also recognized Dr. Gornitsky’s life-long contribution, naming him an Emeritus Professor in 2002. However, the JGH is where he really made his presence felt, with patients benefiting both from his expertise and his longevity as a member of the department since 1957.

Dr. Gornitsky has devoted himself primarily to research since 2006, but during the COVID-19 pandemic, he has continued his involvement in teaching Ph.D. and Master’s students.

In addition, he uses Zoom to speak with patients who have been referred to him by the JGH Department of Oto-Rhino-Laryngology. Many of them are experiencing unexplained pain in their face, ears or head, and Dr. Gornitsky helps to determine whether there might be an oral connection.

“I’m on Zoom about 10 to 12 hours a week, so I guess you could say I’m living life in the fast lane,” he says with laugh. “As a 90-year-old guy, I’ve never experienced anything like this before, but it’s not something I feel uncomfortable with at all.”

Dr. Mel Schwartz, current Chief of the Department of Dentistry, acknowledges this spirit of flexibility and adaptability, which is why he describes Dr. Gornitsky as “an outstanding role model for many dentists who have trained at the JGH.

“I’ve had the privilege of working closely with Dr. Gornitsky for close to 40 years and he has been a wonderful mentor to me. His impact on our department has been exceptional. Under his leadership, it has earned a reputation for providing excellence in patient care, advanced education in dentistry and research.

“Dr. Gornitsky’s attitude toward all of these domains has been to always strive for excellence, explore innovative approaches and support his colleagues and students in their endeavours.” 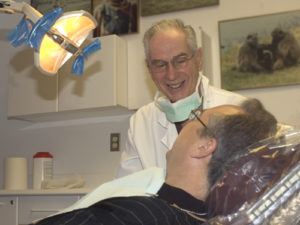 Dr. Mervyn Gornitsky with a patient around 2005.

Dr. Hyman Schipper, a neuroscientist who has collaborated with Dr. Gornitsky on research in the Lady Davis Institute at the JGH, calls his colleague “a pre-eminent healthcare provider, scholar, teacher and humanitarian who has been serving his community passionately and unflaggingly for more than half a century.”

In working with Dr. Gornitsky on maintaining the JGH Saliva Biobank, Dr. Schipper, a staff neurologist at the hospital, says he has found Dr. Gornitsky to be a “consummate professional and a wonderful model for persons in all stages of life.”

The changes that Dr. Gornitsky has witnessed in more than six decades have been enormous. For example, when he began his private practice as an oral surgeon in 1956, his specialty was almost unknown in Canada. Having trained in New York, he became the first oral surgeon in Montreal to be certified by the American Society of Oral and Maxillofacial Surgeons.

When he joined the JGH a year later, the hospital had not yet begun its ambitious, multi-decade series of expansions. That’s why it felt to him like a small community facility with only 250 to 300 beds, compared to 634 today. 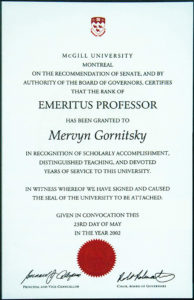 A certificate from McGill University in 2002 recognizes Dr. Mervyn Gornitsky as an Emeritus Professor.

During that era, the hospital still consisted only of what is now known as Pavilion B. And even though today’s Pavilion A did exist, it was occupied by the JGH School of Nursing and was not used by patients.

It was not until 1975, four years after Dr. Gornitsky was appointed Chief of his department, that the JGH became affiliated with McGill. This milestone helped broaden the hospital’s horizons and greatly expand its teaching activities.

Dr. Gornitsky recalls taking a seven-person group of JGH clinicians to Sweden in 1984, where they learned the new technique of surgically placing a dental implant into the jawbone to serve as the strong and durable root of an artificial tooth.

During the 1980s, the JGH also had one of the few dental departments in Quebec hospitals that treated HIV/AIDS patients, with Dr. Gornitsky having personally treated about 2,000 people, using techniques that he helped adapt for this purpose.

Since radiation treatments for oral cancer affect the ability of patients to heal, Dr. Gornitsky and his team worked out a system of providing patients with intravenous antibiotics to minimize potential risks during the extraction of a tooth.

Dr. Gornitsky’s interest in many aspects of oral medicine continued through the 2010s. This includes research into temporo-mandibular disorders (problems associated with pain in and around the joint on either side of the jawbone) and scleroderma (an autoimmune disease involving the hardening of connective tissues, leading to damage of the skin, blood vessels, muscles and internal organs).

Throughout his career, Dr. Gornitsky has also travelled around the world to speak to colleagues about his work, and he has authored or co-authored dozens of articles for journals in his field.

“The key is to stay interested, stay curious and be open to new ideas,” he says. “It’s what has made my many decades of work so fulfilling.”