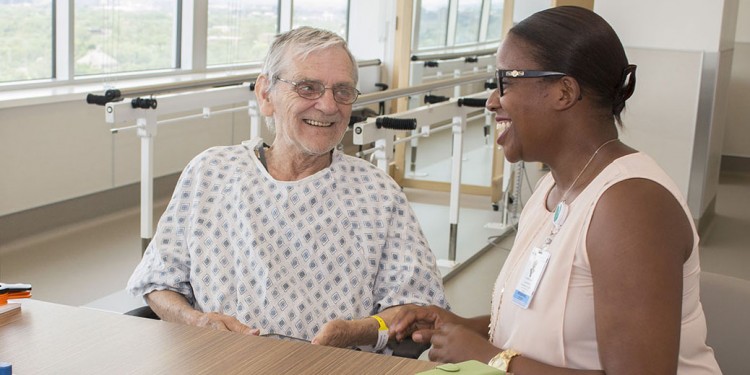 In the physiotherapy room of the JGH Edmond J. Safra Stroke Centre, Bela Erdoskarpaty chats about his treatment with Fabienne Germeil.

Special recognition for quality and efficiency of life-saving care

It was as if someone had flicked off a light switch—and in an instant, Bela Erdoskarpaty lay unconscious on the floor. Later, he was surprised to learn he had been felled by a stroke, an interruption of the blood supply to his head. But what really shocked him was its suddenness.

“I just dropped—no warning, nothing,” said Mr. Erdoskarpaty, four days after his collapse, during a break from tests in June in the Edmond J. Safra Stroke Centre at the JGH. He recalled regaining consciousness within a minute of hitting the floor, “but I knew right away that something was wrong, because I never fell down like that before.”

Mr. Erdoskarpaty, 79, had been visiting a friend, and just as they were about to leave her apartment to go shopping, he crumpled. Fortunately, at that moment, his friend was speaking on the phone with her son in Guelph, and it was his call from Guelph that quickly summoned Urgences Santé.

Less than 10 minutes later, Mr. Erdoskarpaty was aboard an ambulance and glad to be heading to the JGH where, in 2007, he had experienced “care that was perfect” for a heart bypass operation. What he may not have realized was that the hospital was in a particularly strong position to help him, having been designated by the government in March 2016 as a secondary stroke treatment centre.

The new title indicates that the hospital has moved to a higher level of expertise and performance, beyond the general (or primary) stroke care that is offered by many other healthcare institutions.

According to Dr. Jeffrey Minuk, JGH Chief of Neurosciences, if someone experiences a stroke in Montreal, that person is not necessarily taken to the nearest hospital. Instead, the patient is brought to one of only four local secondary stroke treatment centres: the JGH, the Montreal General Hospital, Sacré-Coeur Hospital or Maisonneuve-Rosemont Hospital. (Tertiary, or highly specialized, stroke treatment is offered at the Montreal Neurological Institute and at Notre-Dame Hospital.)

The JGH Edmond J. Safra Stroke Centre was created in 2008, thanks to the commitment and generosity of the Edmond J. Safra Philanthropic Foundation in Switzerland and the Maurice S. Peress family, along with a group of Montreal supporters led by Rona and Robert Davis.

As well, the Goodman family established the Rosalind and Morris Goodman & Family Endowment for the comprehensive Stroke Centre, which enabled the JGH to recruit Dr. Alexander Thiel to head the Centre. The hospital also has the ability to support Dr. Thiel’s neuroplasticity research program, where new treatments have been developed for patients in the early stages of a stroke, when the potential for a full recovery is the greatest.

Both initiatives have had a substantial impact on the quality of life of stroke patients, not only in Canada, but around the world. They exemplify the work of the JGH Foundation in establishing partnerships with donors to ensure that Quebecers benefit from the latest technologies and advances in patient care and research.

Individuals, corporations and foundations are invited to support Dr. Thiel’s research, as well as that of other researchers who are conducting innovative studies into the basic biology of aging and age-related disease, and stroke in particular.

They can do so by directing their contributions towards the Molecular and Regenerative Medicine Research Axis in the Lady Davis Institute at the JGH. Donations can also be made in support of the Stroke Centre. For more information or to make a donation, please contact the JGH Foundation or call 514-340-8251.

To Mr. Erdoskarpaty’s relief, he was later informed that his stroke—caused by a blockage in his neck—had not significantly affected his brain. Even the sagging in his face cleared up fairly quickly. Still, given his age and his previous heart condition, precautionary tests were needed to rule out anything potentially dangerous.

“There were so many things they did for me that I forgot most of them already,” said Mr. Erdoskarpaty with a smile. “What happened to me wasn’t serious, but they really have to check you out. They’re not joking here.”

At a ribbon-cutting ceremony on May 18, the JGH’s designation as a secondary stroke treatment centre was celebrated by (from right) Dr. Jeffrey Minuk, Dr. Lawrence Rosenberg, Francine Dupuis (Associate Executive Director of CIUSSS West-Central Montreal), Johanne Boileau (Director of Nursing for the CIUSSS), and Fabienne Germeil, who holds a letter from the government confirming the hospital’s new status.

At a ribbon-cutting ceremony on May 18 to celebrate the new designation, Dr. Lawrence Rosenberg, President and CEO of CIUSSS West-Central Montreal, praised the inter-disciplinary stroke team—which includes doctors, nurses, a physiotherapist, speech pathologist, dietitian, social worker and occupational therapist—for “setting the standard for what we want to put in place for our healthcare network and for the hospital over the coming years.

“The quality of work that you perform and the degree of integration of all the various services that you’ve brought together to pull this off is stunning and remarkable.”

The upgrade in the hospital’s designation—the culmination of a four-year process of improvements and government inspections—has been achieved, in large part, through better performance, says Dr. Minuk.

To qualify for the higher status, the Neurosciences Department had to develop a quick-response notification system, which ensures that all of the relevant personnel—the stroke team leader, neurologists and a radiology technician—are on hand and ready to treat an incoming stroke patient, the moment the ambulance pulls into the Emergency Department.

As a result, he says, it now takes about 52 minutes for a newly arrived patient to be evaluated, scanned and treated—a huge drop from the 90 minutes that were needed previously. (Canadian health guidelines call for a treatment target of 60 minutes.)

“What this means,” Dr. Minuk explains, “is that the brain is re-perfused earlier and sustains less neurological damage, resulting in shorter lengths of stay in hospital. As the saying goes, ‘Time is brain’—the faster you’re treated, the less damage occurs.”

“The nurses had to review everything connected with stroke care. Even though they were already working with stroke patients, we reviewed the subject as if they were new nurses who had just walked into the hospital.”

In addition, the amount of time that a patient must wait in the Emergency Department before being transferred to the Stroke Centre is being slashed from 24 hours to just four hours. Contributing to this drop was the relocation of the Stroke Centre last January to the 10th floor of Pavilion K, where patients can now receive high-intensity monitoring in a setting outside the Emergency Department. Thus, their transfer is completed with minimal delay, while in-demand Emergency beds are freed up more quickly.

To monitor patients in the high-intensity rooms, all members of staff had to undergo many months of training, with nurses, in particular, becoming adept at an approach that largely resembles critical-care nursing.

“In effect, we started from scratch,” explains Fabienne Germail, Head Nurse in Neurosciences. “The nurses had to review everything connected with stroke care. Even though they were already working with stroke patients, we reviewed the subject as if they were new nurses who had just walked into the hospital. To prepare, we began to practice the new procedures in the Stroke Centre’s previous facilities on 4West, and when we moved to Pavilion K, the transition was seamless.”

Other key features of the new facilities:

“The new designation could not have happened without the committed and professional efforts of many stakeholders from across this hospital and our healthcare network,” says Dr. Minuk. “To me, this was a wonderful model of cooperation and teamwork par excellence.”