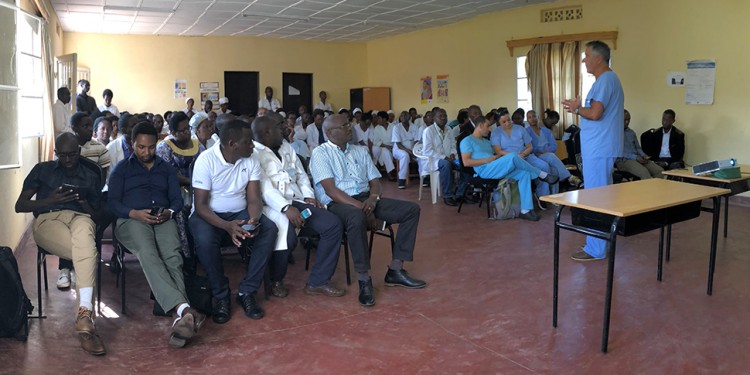 In the meeting room of Ruhengeri Hospital in Rwanda, Dr. Jacques Corcos, a JGH Urologist, delivers a lecture to staff about the medical condition that he and other volunteers have been treating during their twice-yearly visits.

A JGH urologic surgeon and two of the hospital’s nurses have earned the gratitude of a dozen young African mothers, after travelling to Rwanda this past December as volunteers to treat a condition that is relatively rare in North America, but distressingly common among African women.

Dr. Jacques Corcos, a former JGH Chief of Urology, was joined by Nurse Clinician Christiane Honeine and Nurse Bibi Natasha Yasin on a two-week mission to Ruhengeri Hospital, where they provided the women—most of whom live in impoverished circumstances—with surgical treatment and nursing care at no cost.

Their visit, the most recent in a series of twice-yearly trips since 2009, was funded by the MMS Foundation – Healthy Mothers of the World, a non-profit organization founded by Dr. Corcos. Among its goals is to treat and prevent obstetric fistulas in African women; to support the physical, psychological and social rehabilitation of the women who have been treated; and to provide training to African and Canadian healthcare professionals to reduce maternal mortality.

Surgery is the only way to repair a fistula (hole) that forms between the vagina and bladder, or between the vagina and rectum, when a young adolescent woman gives birth. According to Dr. Corcos, girls in many parts of Africa marry in their early teens, and when they become pregnant, the pelvis is not sufficiently developed for childbirth. As a result, the bladder is squeezed against the infant’s head and the mother’s bones.

Cover of the information booklet of the MMS Foundation – Healthy Mothers of the World.

While most patients come from within or near Ruhengeri—Rwanda’s second-largest city, with a population of about 200,000—some women have travelled from as far as Congo and Uganda for treatment.

“It’s extremely challenging surgery,” says Dr. Corcos of the procedure that can last anywhere from two to 12 hours. “Of everything we do in urology, it’s among the most difficult cases. But there are 1.5 million women with this problem in Africa, so the need is great and I’m happy to be of service.”

“I can’t express how rewarding this is,” agrees Ms. Honeine. “You can tell you’re making a positive difference in these women’s lives and they’re so appreciative of the care.”

Joining the JGH trio on the most recent trip were urologists from Ottawa and Tel Aviv, as well as an anesthetist, nurse and coordinator from Montreal. Their time was donated, but that still left the MMS Foundation to cover expenses of about $30,000, most of which was spent on transportation.

The volunteer medical team, including three members of JGH staff, in surgery at Ruhengeri Hospital in Rwanda.

For Dr. Corcos, the work, though satisfying, is often exhausting, since an average mission involves 10 to 15 cases over 10 days of surgery. Ms. Honeine describes her tasks as “much more hands-on” than at the JGH—for instance, coping with stretchers that are older, heavier and harder to use.

“Even so, you adapt and become creative,” she adds. “It helps that the Rwandan healthcare workers are supportive and willing to give you a hand. The resources may be different, but I try to provide the same level of care as I would in Montreal.”

Dr. Corcos says he established the MMS Foundation and launched his missions, because of the obvious need for urologists to treat obstetric fistulas. Although he could have chosen to work in other parts of the world, he was already familiar with Africa, having completed two years of military service for France in the Central African Republic in the late 1970s.

From 2009 to 2015, the teams travelled to the town of Boromo in Burkina Faso twice or three times a year. But after the potential for terrorism increased in that country, Dr. Corcos transferred the mission to Rwanda.

Ms. Honeine, who has made the trip twice to Burkina Faso and twice to Rwanda since 2012, says she first became involved “out of simple curiosity and because I wanted to give something back to the world. Then I fell in love with the work and the people. They just pulled me in.

Bottoms up! Keeping hydrated is as important in winter as in summer