JGH helping smokers to butt out across Quebec and Canada 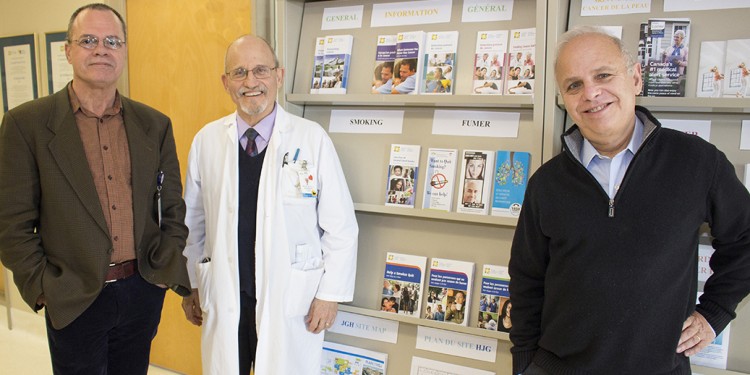 As organizations across Quebec and Canada become increasingly interested in developing campaigns to help smokers kick the habit, many have been looking to the example set by the JGH Smoking Cessation Program, which its founder proudly describes as “the gold standard.”

Last year and again this year, the expertise behind the 14-year-old JGH program is helping to vitalize workshops and programs for the Quebec Lung Association, as well as in Kahnawake, the lower Saint Lawrence and as far away as British Columbia’s Fraser Valley.

“What makes it work is the concept of mutual support,” says founder Dr. Michael Dworkind, referring to the group sessions that are the program’s centrepiece. Smoking Cessation Counselor Joseph Erban adds that when a smoker joins a group, “you not only get group support and encouragement, you get information, the required prescriptions and follow-ups.

“We also keep in touch with our patients. I personally do one-year, follow-up phone calls, and if a person relapses, we try to bring them back into the fold.”

“Taken in total, the focus of the program is not on addiction, but on liberation from the addiction.”

Dr. Dworkind, a staff physician at the Goldman Herzl Family Practice Centre, notes that group support is complemented by crucial attention to individuals. “Joseph knows each and every one of those patients and, in a non-judgmental way, he helps them recognize that smoking is a horribly burdensome thing.

“Taken in total, the focus of the program is not on addiction, but on liberation from the addiction. It’s this combination of components that makes the program so successful.”

At the JGH, Dr. Dworkind and Mr. Erban are also hoping to work with the Department of Psychiatry to launch smoking cessation sessions for people with psychiatric problems, among whom the smoking rate is 40 per cent.

Dr. Dworkind recognizes that people with psychiatric difficulties often use smoking as “a coping strategy to reduce anxiety, help them relax and give them something to do. But at what cost to their physical health?”

With various organizations regularly knocking on his door, Mr. Erban says it’s gratifying to find that the JGH is widely seen as a pace-setter. “The epidemic shows no signs of going away, so every little bit that we do can potentially make a huge difference.”

“It’s exciting and rewarding to see that others recognize the work that we’re doing, which is why they’re interested in adapting it to their setting,” adds Dr. Dworkind. “It feels like we’re accomplishing something truly significant.”

Transforming blank, impersonal walls into sources of beauty and joy