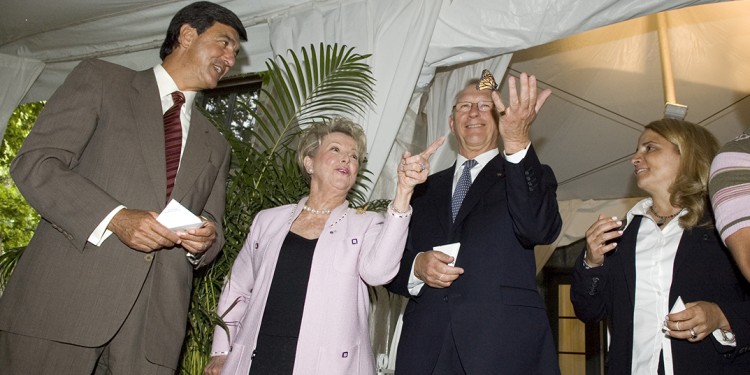 Butterflies, Hope & Cope’s uplifting symbol, took to the air by the dozens on July 3, 2007 at the climax of inaugural ceremonies for the JGH Hope & Cope Wellness Centre (now known as the Hope & Cope Cancer Wellness Centre) and the beginning of a new era of support for patients recovering from cancer.

Each member of the audience received a small box containing an orange and black monarch butterfly that had been brought to the Centre in a refrigerated truck. When the boxes were opened, the warm air revived the butterflies which fluttered around the large tent on the lawn of the Wellness Centre at 4635 Côte‑Ste‑Catherine, west of the hospital.

The Centre occupies a two‑storey duplex that was extensively renovated to include programs to help cancer and their families resume their lives after the trauma of cancer. It was established at a distance from the hospital to give participants a non‑medical setting in which to start a new chapter in their lives.

This is achieved through programs that include exercise (in an on‑site gym), nutrition (in a working kitchen), coping skills, arts and crafts and various support groups.

Sheila Kussner, founder of Hope & Cope, told the guests she was “very proud and very touched” to have launched the organization that gave rise to Montreal’s first wellness centre. “Our base of passion and purpose has defined us from the beginning,” she said, adding that society’s attitudes have evolved significantly from the period “less than three decades ago, when the word ‘cancer’ was rarely spoken aloud.”

Principal benefactor Joey Adler said the Wellness Centre stands out as “a little diamond in our community”, since it takes support and respect for the individual to a new level. “The suffering and pain of cancer are bad enough,” she said, “but when they’re compounded by a lack of dignity, that makes the disease all the more unbearable.”

Renovations were accomplished with major support from the family of Joey Adler and the Diesel clothing company, who have affectionately named the Centre “Lou’s House” in memory of Mrs. Adler’s late husband.

From the archives: Health care … and farming