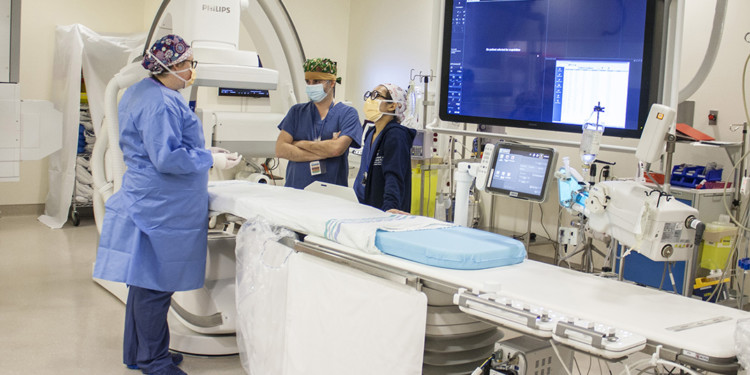 In the JGH Cardiac Catheterization Laboratory, Nurses Tracy Hodge (left) and Zaralyne Lahorra discuss clinical procedures with Dr. Nathan Messas. During treatment, the patient lies on the table and the bi plane equipment (at rear left) is brought forward. The two scanners—one at chest height and the other at head height between Ms. Hodge and Dr. Messas—can capture real-time images from two different angles and project them onto the screen at right. (Click on photo to enlarge.)

The JGH Cardiac Catheterization Laboratory has become the first facility of its kind in Quebec to use advanced digital tools for a procedure in which a special balloon opens narrowed or blocked pulmonary arteries in patients who have pulmonary hypertension.

With the introduction of the up-to-date equipment this past fall, the procedure—a balloon pulmonary angioplasty—has now become a viable option for patients who might not otherwise have been suitable candidates for the intervention.

An earlier version of the equipment, known as a bi-plane table, has been in use at the JGH for many years, but it was less sophisticated than the current model. Its pair of movable scanners capture real‑time images of the patient’s pulmonary arteries from any two angles at the same time, and then instantly project the pictures onto a screen.

Since the pulmonary arterial system and the blockages are now more clearly visible than ever, the interventional team can be more accurate in determining the location and progress of the balloon as it moves through the patient’s body. 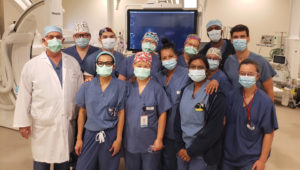 The team of the JGH Cardiac Catheterization Laboratory.

Until now, blockages in the pulmonary arteries were usually unblocked by surgically opening the chest, says Dr. Mark Eisenberg, Director of the Cardiac Catheterization Laboratory. This may still be the best way to treat some patients, but many others can now benefit from a less invasive procedure on the bi-plane table.

Not only is the resolution of the images better, explains Dr. Eisenberg, staff can work more efficiently. As well, there is less exposure to radiation when the patient is injected with iodinated contrast, a type of dye that contains iodine to enhance the visibility of vascular and pulmonary structures.

The intervention is necessary, because blood clots in the lung turn into scar tissue over time. Not only does this impede blood flow, it limits the ability of the blood to fill with oxygen. Pressure also increases in the lung (pulmonary hypertension) and this puts strain on the right side of heart, causing it to fail.

“It’s like night and day compared to the old equipment—no comparison.”

Balloon pulmonary angioplasty provides a solution, but it is a complicated procedure because of the complexity of the lung’s vascular system of branching arteries. Reaching these branches with catheters through a vein in the groin requires a great deal of manipulation that would be impossible without live visualization of the catheters.

The bi-plane system makes it easier to enter each branch with a balloon and penetrate the scar tissue. This restores blood flow through the branches and it allows blood to reach the tiny air sacs where oxygenation occurs.

Nadira Ramrup, Head Nurse in the Cardiac Catheterization Laboratory, notes that only a few Canadian hospitals have a bi-plane table, and even in most of those centres, the equipment is used only for coronary procedures. At the JGH, it is used for both coronary and pulmonary interventions.

The JGH has taken the lead in Quebec, thanks largely to Dr. Ali Abualsaud, who received specialized training in Japan in performing a balloon pulmonary angioplasty. According to Dr. Eisenberg, this makes the JGH one of only a handful of centres in the world with the capability of performing this procedure.

“Every time we acquire new equipment, there’s a quantum leap in what we can do.”

With the latest software embedded in the most recent version of the bi-plane table, safer interventions can also be performed by Dr. Dominique Joyal to unblock severely calcified obstructions of the coronary artery, a condition known as chronic total occlusion.

The imaging technology in the new generation of the bi-plane system provides excellent visibility, using ultra-low doses of x-rays. This is particularly beneficial to patients with chronic total occlusion, since they are exposed to less radiation even during the lengthy intervention.

For a coronary angioplasty, advanced calculations can be performed by using software known as intra-site co-registration. It helps guide the team in determining the length of the arterial vessel and the degree of blockage, as well as which stent to choose in each specific instance.

In emphasizing how far the technology has advanced, Dr. Eisenberg recalls the images that were used when he began working in the old JGH Cardiac Catheterization Laboratory in 1995. “After the procedure was finished, you’d look at actual x-ray film, and often you’d see things on the film that you couldn’t see while you were working on the patient.

“Also, when I was doing my training, stents were just coming in, and now it’s unheard-of to perform a procedure without them. Every time we acquire new equipment, there’s a quantum leap in what we can do.”

Especially encouraging, he adds, is the fact that a wider range of patients can now be treated than was previously the case. Furthermore, today’s procedures are far more complex than would have been contemplated 20 or 25 years ago.

“The most recent upgrades are typical of the ongoing evolution and innovation that we see in the Cardiac Catheterization Laboratory,” says Dr. Eisenberg. “They provide us with new options and greater versatility, which result in enormous benefits to our patients.”