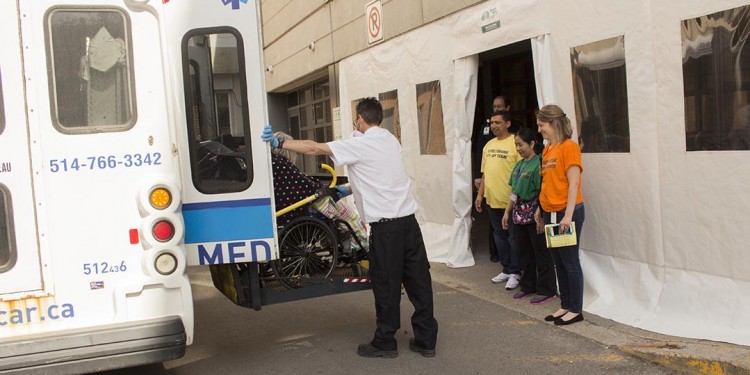 A resident of the Henri Bradet Residential Centre arrives by adapted transport at the Jewish General Hospital.

Newly arrived residents from Henri Bradet are welcomed to the fourth floor of Pavilion C.

Sixty-six long-term care residents of the Henri Bradet Residential Centre have moved to the JGH on a temporary basis, so that their permanent quarters on Chester Avenue in Montreal can undergo much-needed renovation. Both facilities are member institutions of the Integrated Health and Social Services University Network for West-Central Montreal.

Henri Bradet residents wait in a lounge while their rooms are prepared.

The residents, who arrived on May 28, were brought to the fourth floor of Pavilions C and D, which will be their home for 12 to 18 months. While at the hospital, they will receive care from the familiar professionals who tended to their needs at Henri Bradet.

The relocation was smoothly completed on a sunny and mild Sunday morning and afternoon, with the elderly residents in wheelchairs driven in stages to the JGH by adapted transport. After arriving on the fourth floor, they waited and ate lunch in two lounges while their beds and rooms were prepared by a special team of staffers.

Neurofeedback may prove useful only for its placebo effects