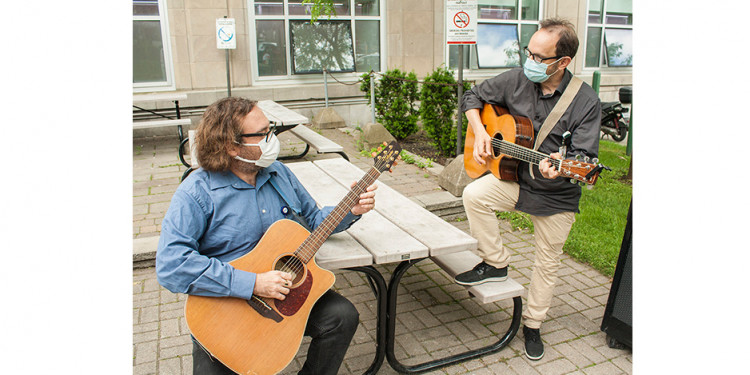 Sam Minevich (left) and Henri Oppenheim, the JGH’s Music Therapists, practice in the picnic area near the Pavilion A entrance, where the JGH Jazz Festival will be held from June 27 to 30.

After a two-year absence due to the COVID-19 pandemic, the JGH Jazz Festival is returning on June 27 for an eclectic four-day series of free noon-hour concerts that celebrate the healing power of music.

Kicking off this year’s edition is a jazz fusion performance by a group featuring Sam Minevich and Henri Oppenheim, the JGH Music Therapists who are organizing the festival with assistance from the Department of Volunteer Services.

As always, admission is free, with patients, staff and visitors invited to attend the concerts in the picnic area near the entrance to Pavilion A. In case of inclement weather, the performances will take place in Carrefour Lea Polansky.

Even if the weather is good on June 30, the concert will be held in Carrefour Lea Polansky, where jazz pianist Marianne Trudel will play a grand piano donated by Arlene Greenberg, retired Chief Medical Librarian of the JGH Health Sciences Library.

In previous years, the series was usually longer and more elaborate, with the most recent edition—the 20th anniversary celebration in 2019—consisting of two concerts per day for two weeks.

Mr. Minevich explains it was only relatively recently that approval was given by the hospital’s Health and Safety team to hold the festival. Since the event is complicated and time-consuming to organize, a four-day series was all that could be arranged.

“We also thought it would be a good idea to start somewhat smaller and ramp up to something more ambitious next year,” Mr. Minevich says. “These four performances are a good way to show we’re getting back to normal.”

Where: In good weather, the first three concerts will be held in the picnic area on Côte-des-Neiges Road (corner of Côte-Sainte-Catherine), near the Pavilion A entrance.

For the fourth concert and in case of bad weather on the other days, performances will take place in Carrefour Lea Polansky, near the food court on the ground floor.

Mr. Oppenheim adds that even an abridged lineup “will allow us to express appreciation to our staff for their hard work during the pandemic, to volunteers who are returning to improve the quality of patient care, and to members of the public for the difficult conditions they’ve endured for the past two years.”

According to Mr. Oppenheim, the JGH has embraced music, because “it’s an incredible way of bringing people together and allowing them to experience emotions that can’t be articulated verbally. Music powerfully evokes memories and feelings, and it encourages the healing process.”

“It’s really refreshing for us to finally be doing this again,” says Mr. Minevich. “Music is integral to our own lives, since we play for patients every day on a one-to-one basis. But it’s a welcome change to be able to focus again on the community-oriented aspect of music.

“Since the hospital is a clinical environment, we use music to try to provide balance. The Jazz Festival is a beautiful way of changing the esthetics of the hospital and bringing music to a broader audience.”