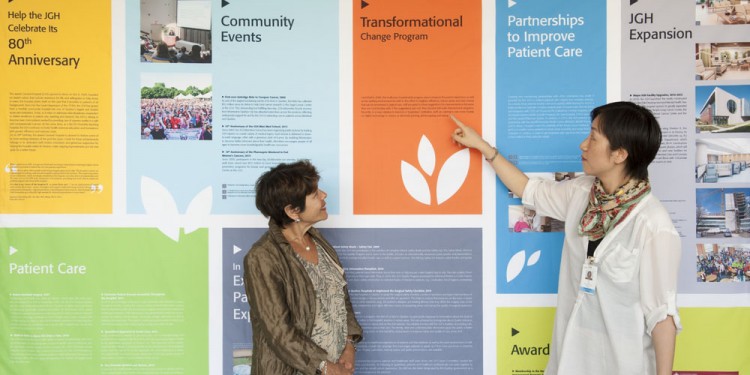 Arlene Greenberg and Linda Lei review the large commemorative poster that lists many of the JGH’s most recent achievements.

A large bilingual poster, recounting many of the JGH’s proudest achievements in recent years, is on view in the main lobby as part of the year-long celebration of the hospital’s 80th anniversary.

Standing 2½ metres high and 3 metres wide, the poster describes such landmarks as the launch of the new Emergency Department in Pavilion K, the inauguration of the Dubrovsky Molecular Pathology Centre, the success of the Transformational Change program, and the JGH’s 2013 accreditation with the highest possible standing.

Library Archivist Linda Lei, who developed the project, said the JGH continues to showcase many of the historical artifacts that were put on display for the hospital’s 75th anniversary in 2009. To update visitors about the past five years, the poster provides short descriptions of the highlights in a visually arresting format full of photos and large blocks of colour.

The challenge, says Arlene Greenberg, the Chief Medical Librarian, was to find the space—even in such a large poster—to include the numerous accomplishments of just the past few years. “We may not have captured every detail,” she says, “but the major initiatives are there.”

Alongside the poster in the lobby are display cases with artifacts and souvenirs from all eras of JGH history. Among the most recent is a commemorative shovel from the ceremony to break ground for the construction of Pavilion K.

Strategy to improve efficiency under way throughout the JGH