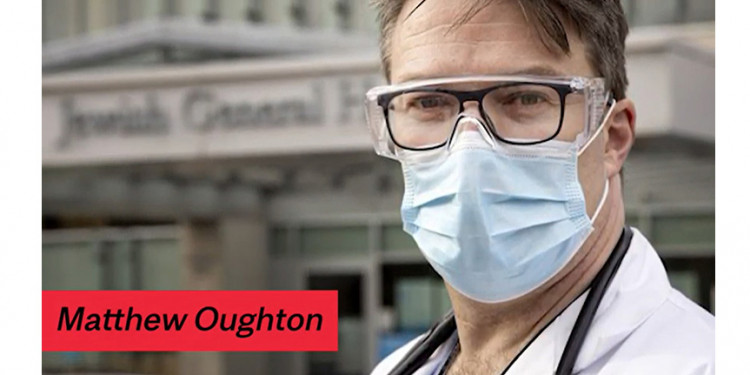 Dr. Matthew Oughton is shown on YouTube during a ceremony by McGill University to announce that he had won a Principal’s Prize for Public Engagement Through Media.

After being featured in more than 400 media interviews about COVID-19 over the past year, Dr. Matthew Oughton, a JGH specialist in infectious diseases, has been honoured by McGill University for regularly bringing reliable information about the pandemic to the public’s attention.

Dr. Oughton, an Attending Physician in the JGH Division of Infectious Diseases, received the Changemaker Prize, one of several awards collectively known as the Principal’s Prize for Public Engagement Through Media.

In a ceremony on YouTube (starting at 16:30 in the video) on April 13, Suzanne Fortier, McGill’s Principal and Vice-Chancellor, praised Dr. Oughton for his “extraordinary commitment to sharing accurate information about the virus.

“He has consistently offered clear, calm and helpful information about the virus through over 400 interviews. This has led to nearly 2,000 mentions in the media.” 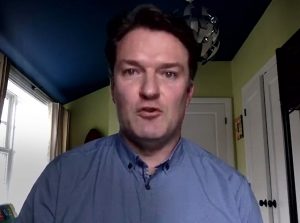 During a YouTube ceremony, Dr. Matthew Oughton thanked McGill University for his Principal’s Prize for Public Engagement Through Media.

Dr. Oughton, who is also a medical microbiologist in the Department of Clinical Laboratory Medicine in OptiLab Montreal-CUSM, as well as an Assistant Professor of Infectious Diseases at McGill, said during the ceremony that the award “is a huge honour. It tells me there are people out there listening and it helps me understand that I have made something of a difference.”

Later, in an interview, Dr. Oughton said he has been seen and heard most often in the national and local newscasts of CTV and CBC-Radio, with additional print appearances in The Gazette and La Presse. On a global scale, he has been quoted by The Washington Post, Time magazine and even, on two occasions, by a radio station in Seoul, South Korea.

Often this results in an extended work day that begins early, he says. “Speaking not only as a doctor, but as a husband and father of three, I’ve found it best to do my media interviews very early in the morning, when most other members of the household are asleep.

“For me to have done so many interviews from home, and to have only one of my children show up twice on camera—I think that’s actually pretty surprising.”

Although Dr. Oughton’s role is somewhat unusual, he explains it’s in line with expectations for doctors not only to provide treatment, but to be educators, who teach medical students and residents, dispense information to patients, and act as advocates for better health care. 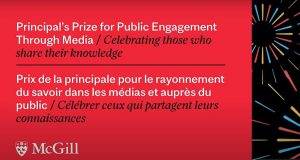 Before the pandemic, Dr. Oughton was called upon only occasionally for interviews. But once the crisis hit, the Communications Departments of the CIUSSS and McGill recognized that he could provide articulate comments as someone who sees patients and also has academic standing.

Among his toughest challenges is keeping viewers, listeners and readers interested, despite their fatigue with the pandemic. The solution, he says, is to strike a balance between simplicity (maximizing impact through a succinct message) and complexity (including enough information for an authoritative message).

“It’s been really gratifying to receive recognition from my peers and co-workers at the hospital,” he says. “I’ll just be walking down the hallway and I might get an elbow bump or someone might say, ‘Hey, I saw you on TV last night.’ Those words of encouragement mean a lot to me personally.”

On a lighter note, Dr. Oughton’s global exposure has had some unexpected consequences. “My family name is fairly uncommon, so it’s led to my hearing from distant relatives I didn’t even know existed. After they saw some of my media interviews, they found me through McGill’s website.”

Appearing in the media has even brought Dr. Oughton full circle to memories of childhood. “I’ve always been a news junkie,” he recalls. “Even when I was a kid, I used to listen to early-morning radio with my father while everyone else was asleep.

“That’s why today it’s so satisfying to be interviewed on those same stations and play a role that I hope will help listeners during a difficult time in their lives.”