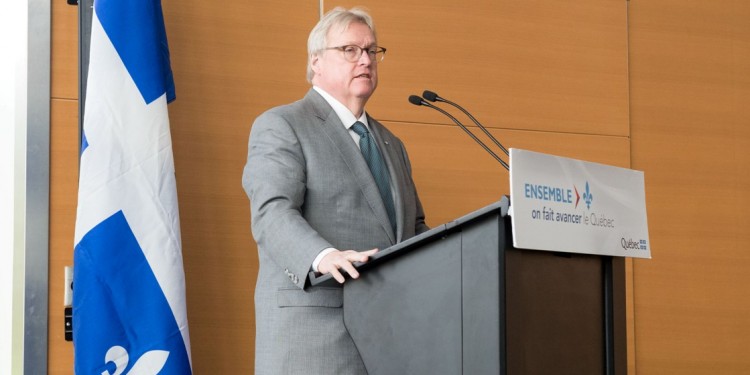 In a news conference at the JGH, Gaétan Barrette announces additional spending for operating rooms.

In addressing the media to outline measures for reducing surgical backlogs, Dr. Gaétan Barrette, Minister of Health and Social Services, stated that he picked the JGH as the site of his news conference on November 28 to commend the hospital for its high level of performance and efficiency.

“I have chosen to make the announcement here, because the Jewish General Hospital is, in many respects, an extremely efficient hospital, and I commend the work that everyone has performed, including Dr. Rosenberg, the Board of Directors, the Foundation and the staff.”

Dr. Lawrence Rosenberg addresses the media and CIUSSS managers in a news conference at the JGH.

The minister noted that Dr. Lawrence Rosenberg, President and CEO of CIUSSS West-Central Montreal (of which the JGH is a member), has been instrumental in the sound administration of the hospital’s finances.

“I predict,” Dr. Barrette added, “that when I return to make another announcement next winter, I expect to say that this CIUSSS will be the first to comply with the limits on all of the delays (in waiting times) that we have agreed upon in our network. This, right here, is an efficient hospital that deserves recognition.”

The highlight of the news conference was an announcement by Dr. Barrette of an infusion of $20 million into the healthcare system to reduce backlogs for surgery by opening 18 operating rooms in 13 hospitals across Quebec. The estimated result, he said, will be an additional 22,400 operations per year.

This means the JGH can now use three existing operating rooms in Pavilion K that are fully equipped and ready to go. CIUSSS West-Central Montreal will receive an extra $3.6 million for 3,720 additional operations per year.

At the time of the news conference, 12 patients in the CIUSSS had been waiting more than 12 months for surgery, and about 10 more had been waiting at least six months. Dr. Barrette said the additional funds will substantially reduce the CIUSSS’s waiting list—if not wipe it out altogether.

The Minister explained that it will be possible to hire for the new operating rooms, because the additional funds are recurring, rather than being supplied only on a one-time basis.

Apps have potential for a role in mental health care, conference told