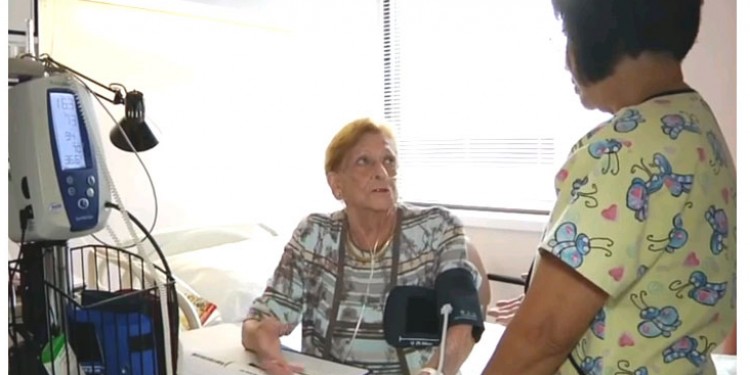 Lyse Hubert, a respiratory patient, is assisted by nurse Della Rous at the Mount Sinai Hospital, located in the new west-central healthcare network to which the JGH now belongs.

Now that the reorganization of Quebec’s public healthcare system is under way, former Presidents of the Jewish General Hospital are reassuring the hospital’s supporters that the JGH is protected by special measures in the new legislation.

The Past Presidents acknowledge that major adjustments will be made in the way that policy is established and the hospital is governed. “But the JGH remains the same institution that we’ve grown up with, dedicated ourselves to and depended upon for decades,” says Samuel Minzberg, who served as President from 2007 to 2009.

“As far as donors, patients, volunteers and the public are concerned, the changes will be almost imperceptible,” he adds. “What matters most is that patients will continue to receive treatment and care of the same high quality that they’ve always expected from the Jewish General Hospital. It’s extremely reassuring to me that strong emphasis will continue to be placed on enhancing the patient experience.”

Jonathan Wener, C.M., President from 2000 to 2003, explains that the legislation contains provisions for preserving the identity, legacy, linguistic rights and unique character of the JGH.

“This level of security was not so clearly stated in the original draft of Bill 10 last fall,” he says, “but now everything has changed. Under the new law, our hospital remains a legal entity with the right to keep its own name, property and bilingual status.

“It means so much to me that the family feelings and warmth, the openness to people of all backgrounds, and the special characteristics that have endured at the JGH since 1934 are—and will continue to be—firmly in place.”

This should come as especially welcome news to donors, since the JGH will be the same hospital they have believed in and supported, says Bernard Stotland, FCA, whose term as President ran from 2009 to 2011. “The buildings and equipment that donors generously provided remain JGH property. We’re grateful that the benefits of those donations will now be felt by new generations of JGH patients.

“The same is true for donations that are made from now on. Contributions that are intended for the JGH do not have to be shared with any of the other institutions in the new local healthcare network that the JGH now belongs to.”

For sentimental reasons, Stanley K. Plotnick, who was President from 2003 to 2005, admits he’ll miss the JGH Board of Directors, now that policy decisions will be made by a regional board that includes JGH delegates.

“But the end result won’t be much different from what we have now,” he says. “The JGH’s voice will be heard, loud and clear, at the regional level. So even though the mechanisms will change, we’re writing a new chapter in more than 80 years of JGH professionalism and tradition.”

Walking into the future
in honour of loved ones

Donors reassured about continued vitality of JGH identity and legacy