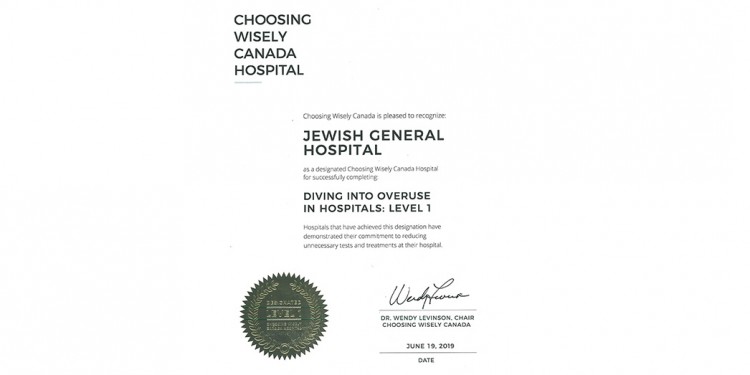 Certificate designating the JGH as a Choosing Wisely Canada hospital.

The JGH has achieved official recognition for implementing measures to reduce unnecessary medical tests and treatments, and for committing itself to doing so on an ongoing basis.

Acknowledgement has come from Choosing Wisely Canada, a national organization dedicated to ensuring that patients only undergo tests, treatments and procedures whose value is evidence-based.

Choosing Wisely originated in the United States in 2012 and now has member institutions in at least 20 countries. The Canadian branch was founded in Toronto in 2014.

According to the organization, up to 30 per cent of tests, treatments and procedures in Canada are potentially unnecessary. They could “expose patients to harm, lead to more testing to investigate false positives, contribute to unwarranted stress for patients and their families, and consume precious time and resources.”

In a letter to the JGH, Dr. Wendy Levinson, Chair of Choosing Wisely Canada, says certification means that “you are allowing for hospital resources to be reallocated to where they are needed most, and are reducing waiting and processing times, as well as improving care by reducing the potential for adverse events and downstream testing.”

In attaining the first of three levels of recognition (which required the identification and elimination of five unnecessary practices), the JGH has become the second hospital in Quebec to be certified, along with the MUHC.

“Our goal is to be certain there’s proof that everything that we order for patients is worthwhile,” says Dr. Shannon Fraser, who heads the hospital’s Pertinence Committee and oversaw the effort to receive recognition from Choosing Wisely Canada.

“We already have the culture and the desire to do the right thing,” adds Dr. Fraser, who is JGH Chief of General Surgery. “This simply formalizes what we do and places us on a national stage, where we can benchmark against what other institutions are doing.”

Dr. Fraser says that although some unnecessary medical tests and procedures exist at the JGH—as is the case in other healthcare institutions—members of staff consult the latest research to identify redundant practices, and then they move quickly to eliminate them.

To qualify for certification, the JGH has ensured that:

For the second level of certification, the JGH is currently working on implementing three additional projects, says Dr. Fraser. One of them involves streamlining the hospital’s cumbersome pre-operative testing process—for example, eliminating chest x-rays for individuals under 40 who don’t smoke, and doing away with electrocardiograms for those under 40 who have no history of cardiac problems.

Eventually, Dr. Fraser hopes to include other CIUSSS facilities under the banner of Choosing Wisely Canada, but since this endeavour is so new, the focus will be on the JGH for the time being.

“It’s been a tough few years, because of the cutbacks and people trying to do more with less,” she says. “This certification recognizes how well we’ve managed not only to cope, but to actually keep improving the quality of care. It’s a real feather in our cap.”