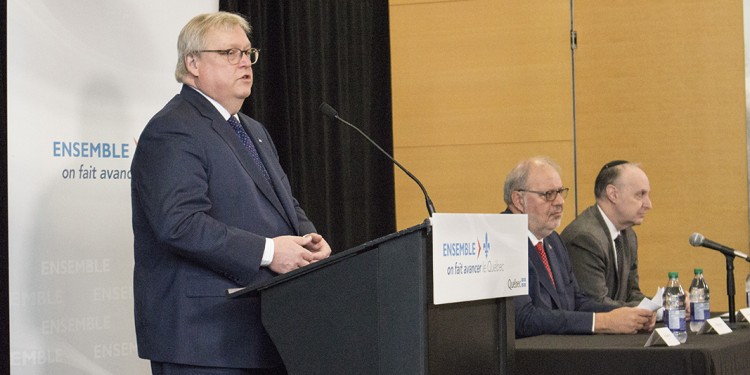 Hospital to refurbish spaces vacated in move to Pavilion K

A $200 million commitment by the Government of Quebec is enabling the JGH to proceed with extensive renovations to the old and outdated areas of the hospital that were vacated in 2016 when many departments and services moved into the newly completed Pavilion K.

Dr. Lawrence Rosenberg speaks at the news conference, in the company of Dr. Gaétan Barrette (centre) and Pierre Arcand.

At a news conference at the JGH on April 30, Dr. Gaétan Barrette, Minister of Health and Social Services, announced that the funds will support approximately 40 projects to refurbish a total of 35,000 square metres of space throughout the hospital.

A key aspect of the renovations, Dr. Barrette said, will be to reconfigure all of the patients’ rooms in the JGH’s legacy building, some of which now have as many as six beds. By the time this multi-year endeavour has been completed, all of the rooms in the legacy building will be private or semi-private, as is now the case in Pavilion K.

He added that since the work will follow a carefully structured schedule, no beds will be closed during any of the renovations. “We have absolutely no intention to reduce the number of active beds in the hospital,” he said.

According to Georges Bendavid, Director of Technical Services, about 18 months of planning lie immediately ahead, followed by five years of renovations lasting until the mid-2020s.

However, Mr. Bendavid notes, some work has already begun on projects that are urgently needed—notably, the launch of a new dialysis unit in Pavilion D, and the demolition of the former operating rooms in Pavilion B to make way for a new Psychiatry In-patient Care Unit.

Dr. Barrette stated that the government’s confidence in the JGH stems from the hospital’s proven track record of providing patients with high-quality care. “It has been doing that for years and years and years,” he said, “and it will continue to do so with one very simple mind-set: to offer the best quality of care possible.”

Dr. Lawrence Rosenberg, President and CEO of CIUSSS West-Central Montreal, explained that the upcoming renovations are actually the fourth phase of the much broader project that led to the construction of Pavilion K. The first three phases involved completing the Emergency Department, the critical‑care floors and the tower for the new pavilion.

“This fourth phase is as crucial as the other three,” Dr. Rosenberg said, “because of society’s increasing healthcare needs, especially among the growing proportion of the elderly population.”

Therefore, he said, over the next several years, the JGH plans to:

“In working toward these objectives, we are striving to fulfill the goals that we set for ourselves when our CIUSSS came into existence nearly three years ago: to provide greater access to care, more timely care, and a seamless continuity of care.

“As always, our centre of attention is the patient — and, by extension, all of the residents, clients and users of our CIUSSS. The ever-present question before us is: What do they need and how can we supply it?”

Also present at the news conference was Pierre Arcand, Minister Responsible for Government Administration, Chair of the Treasury Board and MNA for Mount Royal, who said the government’s support for the renovations “confirms that we pay attention to the needs of the users and we take it to heart to support initiatives that answer those needs in a very concrete way.”

Six in a row! JGH named a top employer again this year