From the archives: JGH test for early detection of dementia goes into world-wide use 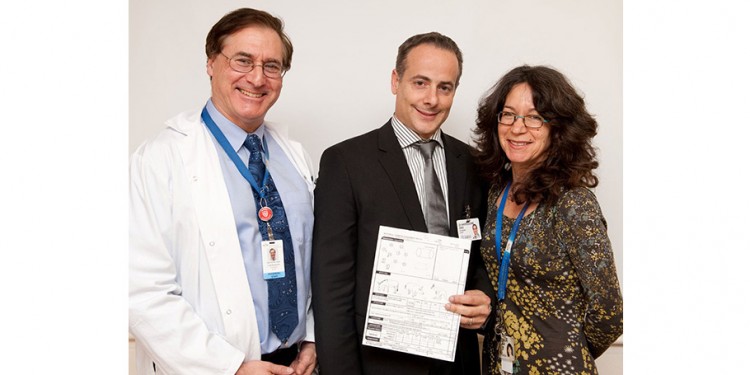 Dr. Howard Chertkow (left), with co-developers of the Montreal Cognitive Assessment—Dr. Ziad Nasreddine, a Montreal cognitive neurologist, and Dr. Natalie Phillips, a researcher in neuro-psychology at the Lady Davis Institute.

In 2005, the world took note of—and soon adopted—the Montreal Cognitive Assessment (MoCA), a simple, yet refined, questionnaire that had been developed by Dr. Howard Chertkow, founding director of the JGH Memory Clinic, and his colleagues at the Lady Davis Institute.

Capable of being administered in only 12 minutes, the questionnaire was the first tool that enabled clinicians to accurately differentiate between the expected memory function of an elderly person and the mild cognitive impairment that could be a precursor to Alzheimer’s disease.

“There was really nothing that allowed doctors to make this particular distinction before MoCA,” Dr. Chertkow said. “The only tools available were designed to pick up dementia, which is a much more severe condition. MoCA allows physicians to make an earlier and faster diagnosis of memory impairment.”

MoCA was cited by the Canadian Institutes of Health Research’s in its International Collaborative Research Strategy for Alzheimer’s Disease as one of the seven top Canadian contributions to the dementia field.

The developers made MoCA freely available to all physicians online. It has been translated into 32 languages and has become a world standard for diagnosing cognitive decline across a range of conditions, including aging, AIDS, multiple sclerosis and head injuries.