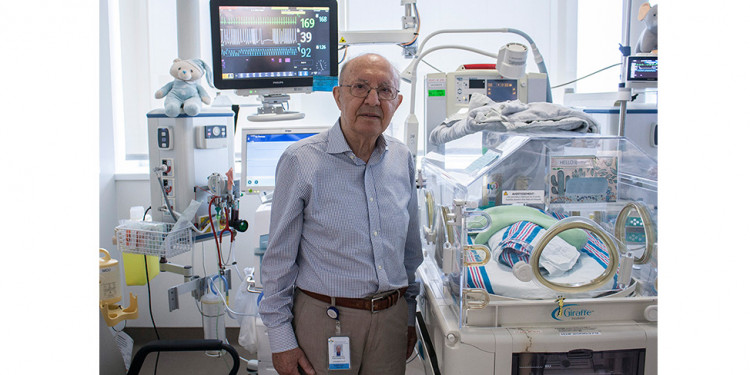 Dr. Apostolos Papageorgiou in the Neonatal Intensive Care Unit of the JGH. (Click on this or any photo to enlarge it.)

Dr. Apostolos Papageorgiou to remain on staff in Department of Pediatrics and Neonatology

In 1973, Dr. Apostolos Papageorgiou thought he had his future all mapped out: Having trained in Montreal in pediatrics and neonatology, the young specialist planned to spend a year at the JGH before returning to practice in his native Greece. 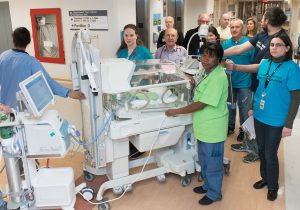 In 2016, Dr. Apostolos Papageorgiou (centre, behind incubator) helped supervise the move of the Neonatal Intensive Care Unit to Pavilion K.

But then life took an unexpected turn. When the year was up, the JGH invited him to become Chief of Neonatology, so he decided to stay a while longer … then years longer … then decades. What had begun as a relatively brief stopover eventually became a life-long career.

And now, after nearly half a century at the hospital, Dr. Papageorgiou has relinquished the position of Chief that he held for 47 years, as well as stepping away from the additional role of Chief of Pediatrics that he accepted in 1986.

“When I was asked to stay, neonatal intensive care was being reorganized across Quebec, and I want to help the Jewish General evolve into an important centre of care,” Dr. Papageorgiou explains.

“I was only supposed to remain for an extra year to oversee those changes, but … ”—he pauses to chuckle—“ … as you can see, that year has not finished yet.”

On a more serious note, Dr. Papageorgiou says he has chosen to give up his double leadership role (but to continue as a member of staff), because “at the age of 84, I think it’s time.” As well, he says, he could not realistically have expected to fulfill another term as chief, which would have run for five more years.

What remains unchanged is his legacy and reputation as one of the world’s leading neonatologists who, in a professional capacity, has visited more than 50 countries and delivered more than 500 international lectures.

Dr. Papageorgiou has also gained acclaim for devising techniques to save the lives of premature infants with remarkably low birth-weights, whose survival rate has been dropping gradually but steadily since the 1970s.

In one celebrated case in 2012, Dr. Papageorgiou helped save the life of a tiny girl—the smallest preemie in Canada—who weighed just 375 grams (about ⅘ of a pound) when she was born at the JGH. 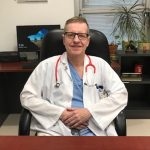 Dr. Lajos Kovacs has been named Interim JGH Chief of Pediatrics and Neonatology, following a decision by Dr. Apostolos Papageorgiou to relinquish that role.

An active member of hospital staff since 1993, Dr. Kovacs is an Associate Professor of Pediatrics at McGill University and, for the past several years, has been the neonatology rotation coordinator for pediatric residents.

Having completed his pediatric residency training and a neonatal fellowship at McGill, he is pursuing an interest in neonatal pulmonary and infectious diseases, which has led to his involvement in numerous clinical research projects.

In addition, he notes with pride that he and his team have saved two other infants who weighed less than 400 grams at birth.

Also notable was a landmark study by Dr. Papageorgiou—published in 1979 in the prestigious journal, Pediatrics—which found that administering steroids to a pregnant woman increases the chances of the fetus’s survival by accelerating the maturation of its lungs. 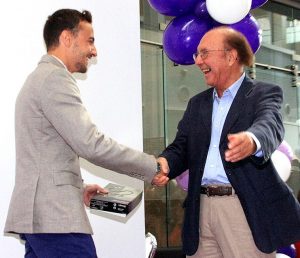 In 2016, the JGH held a celebratory reunion for children and teenagers who had been born prematurely. At the event, Dr. Apostolos Papageorgiou presented a neonatal stethoscope to Angelo Rizzolo, who has gone on to pursue a career in medicine.

Similarly, after birth, if the premature infant is given hydrocortisone (a type of steroid), its lungs develop more quickly, enabling it to spend less time on a respirator. This is a significant form of treatment, since permanent lung damage can result if a preemie is left on ventilation for too long.

These achievements, and many more, have earned Dr. Papageorgiou numerous awards over the decades, the pinnacle being the top prize from the International Academy of Perinatal Medicine, bestowed in 2019 at the Academy’s World Congress in Istanbul.

An additional highlight came in 2013, when Dr. Papageorgiou received the Queen Elizabeth II Diamond Jubilee Medal, marking the 60th anniversary of the Queen’s accession to the throne. The medal recognized distinguished citizens who have made a major contribution to Canadian society.

As well, in 1987, Dr. Papageorgiou received the Osler Prize from his students in McGill’s senior medical class, who voted him the teaching member of the Faculty of Medicine who made the greatest contribution to their medical education.

Thinking back over his career, Dr. Papageorgiou marvels at the changes he has seen at the JGH: Starting with just six incubators, Neonatal Intensive Care Unit now has 30 and has operated in three locations within the hospital, having moved most recently to Pavilion K in 2016.

Dr. Papageorgiou also recalls that when he was new to the JGH, about 1,600 babies were born at the hospital each year—a total that now hovers around 4,000.

“Never did I think twice about staying,” he says, “because I got so much pleasure in seeing how much progress we were all making together.

“Not only has the hospital been extremely supportive, it has enabled me to work in a warm environment and to excel in my specialty. I’ve had wonderful support from the administration and excellent colleagues who are very devoted. It has been—and continues to be—a pleasure working with them.”