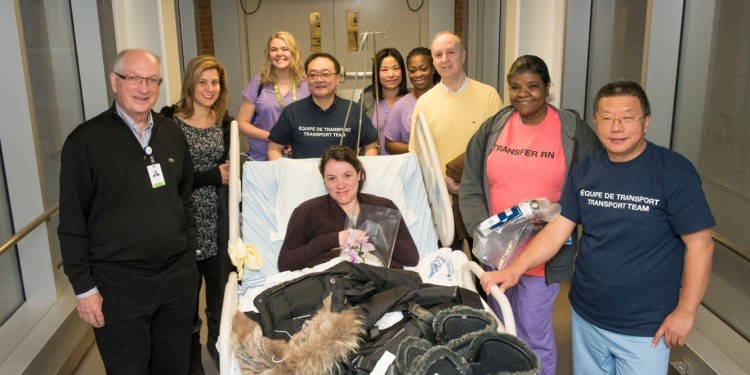 Among the first patients to be moved to Pavilion K was expectant mother Chantal Piché, who was taken to the new Family Birthing Centre. Accompanying her on her brief journey were Alan Maislin (left), President of the Board of Directors of West-Central Montreal Health; Board member Alyssa Yufe (second from left); Dr. Lawrence Rosenberg (third from right), President and CEO of West-Central Montreal Health; and members of the healthcare and transport teams.

Transfer of 203 patients goes off without a hitch

After a decade of planning, years of construction, months of painstaking preparation, weeks of simulation exercises and a day of extremely intense activity, Pavilion K has become the new home of Intensive Care, Coronary Care, Neonatal Intensive Care, the Family Birthing Centre, the operating rooms and numerous other units and services.

The largest, most ambitious and most complicated expansion project in the 81-year history of the JGH reached a climax on January 24, with the transfer of 203 patients to their new rooms in just 5½ hours.

Occurring nearly two years after the Emergency Department was relocated to the ground floor of Pavilion K, the move instantly transformed the new wing into the focal point of the hospital’s critical-care, surgical and birthing activities.

Crucial to the success of the new facility is the luxury of space—space for all patients to have a room of their own, space for several relatives to visit a patient in full privacy, space for staff and life-saving equipment to cluster easily around a patient’s bed, space for picture windows that provide a crucial, psychological boost of light and airiness for patients (in their rooms) and staff (in their lounges).

Heart-felt “goodbye” messages from staff were written on the walls of the Intensive Care Unit in the days leading up to the move. Similar messages appeared on walls and posters in other departments and units.

For numerous employees, the switchover was an emotional event—what Serge Cloutier, Team Coordinator in the NICU, called “a kind of bittersweet feeling.” That’s why, in the days leading up to the January move, a multitude of hand-written goodbye messages adorned walls and posters in the ICU, 7 Northwest, the Coronary Care Unit, the Family Birthing Centre and other areas.

A sampling of those messages: “Goodbye to my first home away from home.” “Trained and raised here as a critical care nurse, 1991 till now.” “This is where I learned to walk and became a strong nurse.” “Lots of laughs & lots of tears, so many memories.” “You never really leave a place you love.” “The 1st unit that felt like home to me.”

At the same time, Diane Brault, Head Nurse of the Cardiovascular Intensive Care Unit, said she and many of her colleagues were eagerly anticipating the greater efficiency and the better quality of care they would be able to provide in Pavilion K.

In the end, it was all a matter of perspective. As one message noted (in quoting a Beatles song) on the wall of the old ICU: “You say goodbye, I say hello, hello, hello.”

Moving out, moving in

Dawn was more than a couple of hours away when staff began arriving at the JGH on January 24 to gear up to move more than 200 patients from the main building to Pavilion K.

At 5:30 a.m. on January 24, about 90 minutes before the move began, members of staff gathered in the Atrium for breakfast and to pick up t-shirts that were colour-coded according to their assigned teams.

By 5:30 a.m., dozens had gathered in the Atrium for a hot breakfast and a t‑shirt that had been colour-coded and imprinted with names of their respective teams.

The air of excitement and anticipation was palpable as Dr. Lawrence Rosenberg, President and CEO of West-Central Montreal Health, told staff they were experiencing “what the founders of the original hospital must have felt when they first opened the doors to patients back in 1934.

“Today we are the pioneers laying the foundations for future care in this hospital and in this community. So remember this day. It is the day that you all will have made a bit of history for yourselves.”

Alan Maislin, Chair of the Board of Directors of West-Central Montreal Health, urged members of staff to “take advantage of this new institution. As we go forward, let’s use this as the launching point to provide the best possible care for the citizens of this province.”

The impending move was described by Johanne Boileau, Director of Nursing, as “a once-in-a-lifetime experience. We are about to embark on a great voyage from the past to the future and I feel very privileged to be part of this team.”

“Today we are the pioneers laying the foundations for future care in this hospital and in this community.”

Finally, Joanne Côté who, as Director of Transition, had overseen the extensive preparations for the move, acknowledged that some employees would miss their old units. “It’s okay to have mixed feelings as you leave an area of work with so many good feelings to cherish,” she said. “But today you are starting a new chapter in your future.”

Then came the moment that thousands had been awaiting for so long—the move of the first patient, at 7:00 a.m., out of the Family Birthing Centre on the fifth floor of Pavilion B.

As that patient was being readied for transport, Marie-Josée Bourassa, the Centre’s Head Nurse, described the atmosphere as “a real adrenalin rush,” while Paul Lao, a member of the Transport Team, felt he was participating in “history in the making.”

From there, it was a matter of following the steps in a carefully predetermined scenario:

“It was very nice, very smooth, very well done,” said Chantal Piché, an expectant mother, who was among the first to arrive in the new Family Birthing Centre. “Everybody seemed really well prepared and they let me know everything that was going on.”

Over and over, the scenario repeated itself, as patients were moved at a steady rate of one every 2½ minutes, except for those in critical condition who were moved every five minutes.

An infant in an incubator is moved through the halls of Pavilion K to the new Intensive Care Unit.

Numerous precautions were also taken. For example, Toula Trihas, Chief of Respiratory Therapy and Anesthesia, explained that when infants were moved between the NICUs, their incubators were attached to special shuttles equipped with back-up systems for the respirator and the respirator’s battery. Also on board were oxygen and air for resuscitation, as well as the means to monitor the baby’s vital signs.

Silvana Perna, Coordinator of Infection Prevention and Control, had arrived early that morning with her team to determine whether any new patients had been put into isolation overnight because of infections.

During the move, one member of Ms. Perna’s team was assigned to the Red Track (critical-care patients) and another to the Blue Track (other patients) to ensure the proper transport of patients in isolation. “At the end of the move,” Ms. Perna said, “we’re going back to Pavilion K to make sure they were properly isolated and that adequate precautions were put in place.”

Relatives of the transported patients also got kid-glove treatment. According to Lyne Charbonneau, a Nurse Clinician and Patient Coordinator, NICU personnel had met with the infants’ parents two days earlier to brief them on what to expect.

“We visited Pavilion K and showed them where their baby would be moved to,” Ms. Charbonneau said. “They know they need to wait, and as soon as we settle all the babies, we will call them and reassure them that, yes, their baby is in the new location.”

Armande Picard was the first patient to arrive in her new room in the Coronary Care Unit of Pavilion K.

For Dr. Apostolos Papageorgiou, Chief of Pediatrics and Neonatology, the move was his fourth at the JGH, but by far, he said, it was the most hopeful and exciting. For the first time, incubators were arranged in groups of six, with each group assigned to a single oversized room (known as a pod) where serenity reigned. This was a far cry from the previous NICU, where more than 30 incubators had been crammed into one room that bustled with constant noise and activity.

“This is an extraordinary event,” enthused Dr. Papageorgiou. “You can imagine my emotions. It’s a wonderful improvement for the families and for the babies. It’s modern neonatology, finally.”

The placid mood of the NICU also impressed Mr. Maislin, who called it “magnificent. I don’t even know if there are adequate words to describe how I feel.” Dr. Rosenberg found it “just spectacular,” adding that one of the most outstanding features of Pavilion K generally was “how quiet it is. When we were watching patients being moved, you could hear a pin drop. It’s unbelievable.”

Doctors who surveyed their new surroundings were also looking forward to significant improvements in care. “Patients are going to be in a unit with less noise, more sunlight and more privacy,” said Dr. Denny Laporta, a staff physician in Intensive Care. “We hope that this environment will be more conducive to healing and communication. Ultimately, we hope patients will feel they can heal better and faster.”

Dr. Richard Sheppard, a staff physician in Cardiology, said he was looing forward to a decrease in infections, since all patients would have single rooms. “Patient confidentiality will certainly be a big plus in those private rooms. We’ll also have a lot more space, in the case of a critically ill patient, to bring in machines that would normally taken up a lot of space in the unit.”

By 12:32 p.m., it was done. The big move—203 patients, 61 of them in critical condition—had been completed without incident, leaving staff to provide care in the new environment.

“I’m very pleased with how it went,” said Ms. Boileau, who paused for a breather after the final patient had been moved. “I’m especially happy there were no incidents. Patient transport is a high-risk activity, but nothing happened. Everything went smoothly. I’m very pleased and very relieved.”

A post-script: At 3:17 p.m., nearly three hours after the move was completed, Cynthia Dahan and David Ohayon became the proud parents of a daughter, the first baby to be delivered in Pavilion K.

Cynthia Dahan and David Ohayon with their new daughter, the first baby to be delivered in Pavilion K.

Here and there - Show slideshow

Donor support is essential to the JGH’s evolution