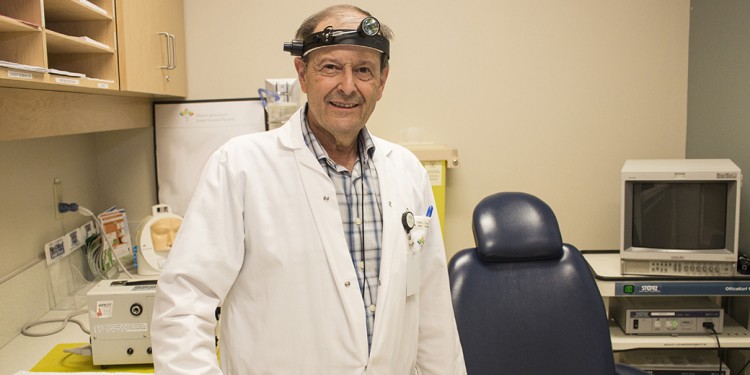 Dr. Frenkiel, who joined the JGH in 1976 and led his department from 1992 to 2011, is a Full Professor in the Faculty of Medicine at McGill University, where he was Chairman of the Department of Otolaryngology – Head & Neck Surgery from 2002 to 2017. He also served as President of the Canadian Society from 2006 to 2007.

In addition, Dr. Frenkiel made international headlines in 2010 for having correctly diagnosed the throat cancer of movie star Michael Douglas after other physicians had missed it.

“This recognition is unexpected, but very welcome,” says Dr. Frenkiel. “Many people have contributed to our specialty, so I feel touched to have been chosen for this honour. Calling it a ‘lifetime’ award also reminds me that I’ve been practicing for a long time, and this brings another level of emotion to the presentation.”

Among his proudest contributions, he says, is having introduced endoscopic sinus surgery, a minimally invasive procedure, to the JGH and McGill in 1986. At the time, this pioneering effort made the JGH one of the rare Canadian hospitals to perform this type of surgery.

Dr. Frenkiel continues his clinical work at the JGH, as well as teaching and research. Most recently, he was named Honouree by the McGill Head & Neck Cancer Fund in 2017, Honouree at the 53rd Annual Aisenstadt Clinical Day at the JGH in 2016, and a Pioneer in Oto-Rhino-Laryngology (ORL) by the ORL and Cervico-Facial Surgery Association of Quebec in 2010.