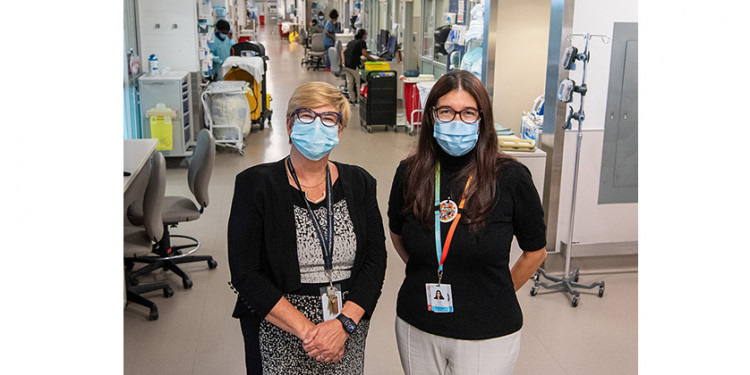 One of the top honours in Canadian nursing has been bestowed upon Lucie Tremblay and Céline Gélinas, with their induction on October 14 as Fellows of the Canadian Academy of Nursing.

Ms. Tremblay, who became Associate CEO of CIUSSS West-Central Montreal on October 1, had served as the CIUSSS’s Director of Nursing since 2019. Ms. Gélinas has been conducting wide-ranging research into various aspects of nursing at the Jewish General Hospital since 2007.

“I feel very humbled to be named a Fellow,” Ms. Tremblay said, noting that this designation will be awarded by the Academy to a mere 18 nurses across Canada this year.

“This is not just recognition for me,” she added, “but recognition of the work that I’ve done as a member of the various teams I’ve worked with—not just nurses, but a wide range of multi-disciplinary professionals.”

Ms. Gélinas said it’s gratifying to be acknowledged for the effort she has invested in research, which has had a real impact on patients and on the nursing profession as a whole at the national level and internationally.

“It’s exciting to begin with an idea and to see it evolve into something beneficial for patients and their families,” she said. “But this happens because of teamwork. In research, you can’t accomplish much alone.”

“This is recognition of the work I’ve done as a member of various teams—not just nurses, but a wide range of multi-disciplinary professionals.”

According to the website of the Canadian Academy of Nursing, its Fellowship program “recognizes and celebrates the most accomplished nurses in Canada and across all domains of nursing practice. It honours the best of our profession.”

The Academy itself is “a comprehensive Canadian hub designed to educate, empower and support nurses to lead, advocate, innovate, and influence public policy that leads to sustainable change.”

Since nursing research is an aspect of the profession that is not widely known to the public, Ms. Tremblay said the Academy is playing a significant role in bringing attention to the valuable contributions of these researchers.

During her career, Ms. Tremblay has been recognized with numerous awards, including the Nursing Leadership Award from the Canadian College of Health Leaders and Le prix Florence, Excellence des soins, one of the most prestigious honours of the Ordre des infirmières et infirmiers du Québec. In fact, just before joining the CIUSSS, Ms. Tremblay had served for six years as President of the Ordre.

Previously, Ms. Tremblay held senior nursing positions at the J. Henri Charbonneau Hospital in Montreal and at the Alfred Desrochers Long-Term Care Facility in Montreal, having begun her nursing career in 1984.

Ms. Gélinas joined McGill University in 2007, where she is a member of the faculty of the Ingram School of Nursing. In 2021, she was awarded the Prix Florence in Nursing Research and Education from the Ordre des infirmières et infirmiers du Québec, and in 2019, she received the Pioneering Spirit Award from the American Association of Critical Care Nurses.

Ms. Gélinas’s research is clinically focused, with a particular interest in managing pain and symptoms among critically ill adults.

In developing clinical tools for nurses to use at the bedside, she takes an inter‑professional approach to care that results from her collaboration with members of the entire care team.

Ms. Gélinas says she’s a firm believer in TEAMwork—that is, Together Each Achieves More.