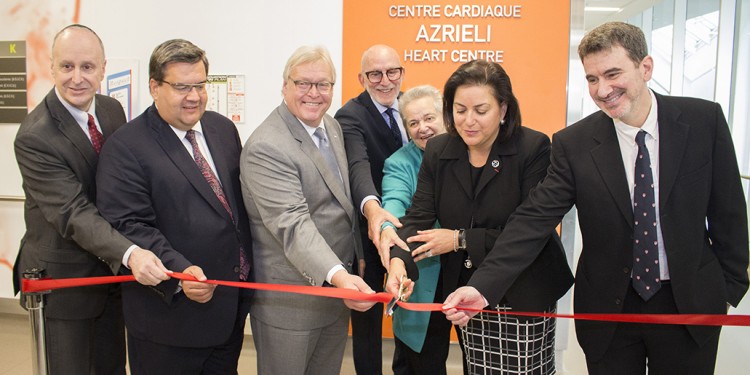 Historic donation described as “a true gift from the heart, to the heart”

The recent introduction of special cross-training programs for certain JGH cardiovascular nurses has been instrumental in enabling life-saving treatment to begin more quickly than ever for heart‑attack patients who have just arrived in the Emergency Department.

This is just one of the dramatic improvements—some already under way, others yet to be implemented—that have become possible through the Azrieli Heart Centre, officially launched at a JGH news conference on September 18 with a remarkable $20 million gift from the Azrieli Foundation.

Along with an additional $5 million for new intensive care facilities in the recently named Azrieli Medical and Surgical Intensive Care Unit, plus $1 million for research, the combined $26 million gift ranks as the most generous acts of philanthropy in the history of the JGH and the single largest in the current JGH campaign.

“This is a true gift from the heart, to the heart,” Naomi Azrieli, Chair of the Board of Directors and CEO of the Azrieli Foundation, told the dignitaries and guests at the news conference in Pavilion K’s Carrefour Lea Polansky.

Ms. Azrieli recalled the advice of her late father, David J. Azrieli, who said that making a donation is not enough. Rather, he said, one must give from one’s heart, with the belief that doing so will make a difference.

She also noted that she, her three sibling and her mother, Stephanie, who was present at the new conference, had all been born at the JGH. “I think that I speak for everyone in my family when I say we feel that this is our hospital. We have a special bond with it and we have always felt so proud, over the years, when we’ve heard about its achievements.”

In a video message, Premier Philippe Couillard thanked the Azrieli family for their gift, as well as praising the high level of performance of the JGH. Gaétan Barrette, Minister of Health and Social Services, told the audience the gift is “extraordinary” because it will enable a leading institution like the JGH to achieve so much more than would be possible through government support alone. “You are allowing this hospital to take a greater step forward towards better care for each and every person in this community,” he said.

Montreal Mayor Denis Coderre praised the Azrieli gift as a prime example of the type of community support which, along with cooperation from all levels of government, has enabled the city to thrive for the past 375 years.

Dr. Lawrence Rosenberg, President and CEO of the Integrated Health and Social Services University Network for West-Central Montreal, said the Azrieli gift will have a single over-arching purpose: to improve the patient experience for those who turn to the Jewish General Hospital for help. This is the ultimate goal of our hospital as a whole, and a fundamental objective of the healthcare network to which we belong.”

Dr. Rosenberg noted that the Jewish New Year, a time of renewal and hope, was only three days away, and thanks to the Azrieli Foundation, “we can rest assured that the coming year—and many more in the future—will deliver that hope by enriching the lives and well-being of the countless patients who look to us for care, comfort and compassion.”

About the Azrieli Foundation

The Azrieli Foundation was established in 1989 to realize and extend the philanthropic goals of the late David J. Azrieli, C.M., C.Q., M.Arch.

Its mission is to empower individuals, facilitate innovation, and increase knowledge and understanding in the search for practical and novel solutions. It encourages creativity and artistry, while ensuring Jewish heritage, memory and a vibrant Jewish future in Israel and elsewhere in the world.

In certain instances, the Foundation operates its own programs. For example:

Also expressing their thanks were Dr. Lawrence Rudski, JGH Chief of Cardiology and Director of the Azrieli Heart Centre, and Edward Wiltzer, Chair of the JGH Foundation, who expressed pride that the Azrieli name will now be so closely association with the Jewish General Hospital.

According to Dr. Rudski and Serge Cloutier (Associate Director of Nursing – Critical Care and Cardiovascular Units), the new training program that began earlier this year has provided skills to many nurses from the Cardiac Intensive Care Unit to start delivering care in the Cardiac Catheterization Lab. Similarly, Cath Lab nurses are now able to begin providing care in the Cardiac ICU.

As a result, when heart-attack patients arrive in the Emergency Department—often to have a coronary artery or other essential blood vessel repaired or unblocked—they receive much faster treatment than was the case just six months ago. Now that the nurses have completed their basic training, a more sophisticated form of training will be provided. This a reflection of the JGH’s longstanding recognition of the value of collaboration among physicians, nurses and a wide range of allied health professionals.

Dr. Rudski, who is Director of the hospital’s Integrated Cardiovascular Program and of the Azrieli Heart Centre, explains that when the nurses receive training outside their main area of specialization, a larger pool of professionals is capable of responding more effectively in a wider range of life-threatening circumstances.

The results, which Dr. Rudski describes as “phenomenal”, have enabled the JGH to consistently meet the target of the Ministry of Health and Social Services for the amount of time elapsed before catheter-based interventions, such as an angioplasty, are begun for heart-attack patients.

“The Nursing Department is extremely grateful to the Azrieli Foundation for such a generous donation,” Mr. Cloutier adds. “It will allow us to continue to improve our expertise and the quality of the care that we deliver to our patients.”

The focal point of the Azrieli Heart Centre is the cardiovascular area in Pavilions K and E. However, Dr. Rudski notes, new facilities do not need to be built, nor is a significant capital investment in technology required. This is because the most up-to-date equipment is already in place in Pavilion K, which itself is less than two years old.

Rather, he says, the Heart Centre will serve as a resource to further strengthen the Division of Cardiology’s clinical, academic and research programs, which are widely recognized as being among the best in Quebec and Canada. “My philosophy has been to favour programmatic building over physical building,” Dr. Rudski adds.

Although the Azrieli family waited until September 18 for their official announcement about the donation, the Heart Centre and the ICU began receiving some of the funds earlier this year.

Naomi Azrieli says her family is “blessed to have had an opportunity to do a lot of good work with a number of organizations this year, and we wanted each of them to have their time in the spotlight.

“By waiting until now for this announcement, we’ve found the right moment to give the Jewish General Hospital the attention it deserves. We wanted to find the best way to talk about the great work the hospital is doing and how we can support it.”

Ms. Azrieli says her family’s foundation decided to back the JGH “because of the excellence of its research, its innovative approach to education, and its focus on patient-centred care. We want to help place the hospital in the strongest position to do what it does best.”

Particularly compelling, she explains, was the proposal for the Heart Centre, which will have “a transformative impact on patient care, with a ripple effect that will be felt throughout the hospital. It will help the institution play an even greater role in Montreal, Canada and the world.”

The gift to the Intensive Care Unit is, to a significant degree, an expression of gratitude for the care that was provided in the ICU to Ms. Azrieli’s father shortly before his death in 2014. “Over the years, a number of relatives and friends have been treated there,” Ms. Azrieli says, “and it was a uniformly excellent patient-care experience.”

With the support of the Azrieli Heart Centre, the following initiatives are now under way:

Dr. Goldfarb also has an interest in speeding the recovery of cardiac patients through early mobility—that is, encouraging them to become physically active as quickly as possible. His clinical work will be complemented by research to develop ways of optimizing care among frail cardiac patients.

Also planned or under discussion: