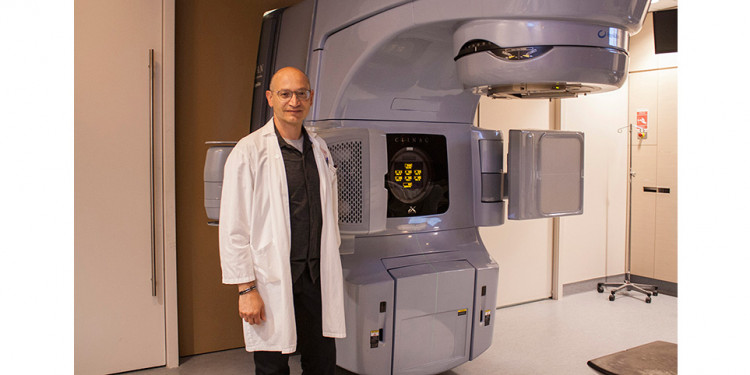 Dr. Khalil Sultanem, Acting Chief of Radiation Oncology, with one of his Division’s linear accelerators. (Click on this or any photo to enlarge it.)

Two storeys beneath the parking lot at the main entrance of the JGH, major construction is under way to prepare for this fall’s installation of a fourth cancer-fighting linear accelerator in the Division of Radiation Oncology. 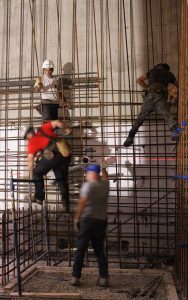 Workers prepare an underground bunker for this fall’s installation of a new linear accelerator in the Division of Radiation Oncology. Under construction is a grid of steel rods to reinforce the thick concrete walls that will enclose the new machine. The horizontal red line at the centre of the photo is a laser beam, which serves as a guide to ensure that the rods—and, eventually, the walls—are level and properly aligned.

In targeting tumours during cancer treatment, the new machine will deliver carefully calculated doses of therapeutic radiation with much greater accuracy, speed and ease. It will also be available for additional, highly specialized procedures.

According to Dr. Khalil Sultanem, Acting Chief of Radiation Oncology, the new accelerator will play a leading role as one of the three active machines in cancer treatment. The device that it replaces will be used as back-up when any of the others is off-line for maintenance.

“We’ve been looking forward to this upgrade for several years,” says Dr. Sultanem. “It creates so many possibilities in providing treatment, and it will allow us to increase our capacity for more patients.”

The linear accelerator—described by Dr. Sultanem as “the workhorse of Radiation Oncology”—emits precise amounts of radiation for specific lengths of time. As the patient lies on a special table, the head of the machine (from which the radiation is released) rotates around the patient and can target the tumour from any angle.

Included are a brachytherapy suite (radioactive implants are inserted into the tissue to kill the tumour), an orthovoltage machine (delivers low-energy radiation to treat skin cancer) and two CT scanners (producing images of the patient to help plan the treatment).

Also on the way is a more advanced type of CT scanner, which will provide images of a much higher quality to locate and examine tumours.

To shield Radiation Oncology staff (as well as the rest of the hospital) from the radiation, each accelerator is located in a carefully constructed concrete bunker whose walls and ceiling are 2½ to three metres (eight to ten feet) thick.

Three such bunkers went into service at the JGH in 2009, after the facilities of Radiation Oncology were extensively renovated. At the time, shells for two more bunkers were also built to accommodate future expansion.

One of those shells is now being finished—an arduous task that has required the parking lot to be closed near the main entrance on Côte-Sainte-Catherine Road.

By breaking through the surface of the parking lot—i.e., the ceiling of the underground construction zone—workers can send liquid concrete flowing down to the bunker more quickly and easily than if it had to be hauled through hospital corridors by wheelbarrow.

Plans call for construction of the bunker to continue until late September, followed by installation of the linear accelerator in October and the reopening of the parking lot around the beginning of December.

During the final weeks of 2021, staff physicists in Radiation Oncology will ensure that the accelerator is properly calibrated and that staff are familiar with its operation—all with the goal of treating the first patients in early 2022.

Funding for the renovations to accommodate the new linear accelerator was generously provided by the Leo and Shirley Goldfarb Foundation, in coordination with the JGH Foundation.

According to Dr. Gerald Batist, Director of the Segal Cancer Centre, the late Mr. Goldfarb (a Past President of the JGH) and his wife, Shirley, had a long-standing interest in supporting the Division of Radiation Oncology.

Although the government is paying for the new accelerator, financial assistance was needed for its installation. This prompted Dr. Batist to turn to Mrs. Goldfarb, who agreed to underwrite the cost of the renovations.

“At some point, more than half of cancer patients require radiation therapy,” Dr. Batist notes. “This major upgrade will improve the quality and efficiency of those treatments, to the benefit of our patients.” 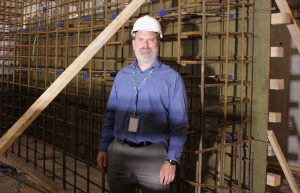 Project Manager Richard Boro in a bunker in the Division of Radiation Oncology, where a new linear accelerator will be installed. Behind him is a grid of steel rods to reinforce the thick concrete walls that will enclose the new machine.

Project Manager Richard Boro says the key to the success of the current endeavour is a much greater degree of precision than is required for most other renovation or construction projects in the hospital.

“When you’re dealing with radiation, you have to know exactly where it will be going,” he explains.

“That’s why, at every stage of our work, everything has to be placed exactly where it needs to be. The machine will eventually sit exactly where it has to, and all of the calculations relating to the radiation will fall properly into place.

“It’s also crucial for this precision to be maintained while the concrete is being manufactured, so that we end up with the right density and thickness to protect everyone on staff who will be working with patients.”

Even the fine-tuning process in the later stages of the project must meet high standards, Mr. Boro notes. “With a regular project, once we finish the basic construction, we might fix a door over here or do a little sanding over there or correct something else.

If you’re thinking about pursuing a nursing career in oncology, why not consider joining the team in the Department of Oncololgy at the Jewish General Hospital, a member facility of CIUSSS West-Central Montreal.

“But in this case, we have to finish completely and create a bunker that’s 100 per cent clean, because the presence of any dust would be disastrous.

“We have faith in the skills of the external workers who are carrying out these tasks. But many of them—for instance, those who will be pouring the concrete—normally perform work that require brute strength. For this project, we’re asking them to be precise.”

Mr. Boro says that, aside from exceptional projects like building a new wing (such as Pavilion K), the installation of the linear accelerator “is as large a project as you’re likely to see in the hospital. Getting it right is a painstaking challenge, but the reward is in knowing how big a difference it’ll eventually make to countless patients.”