Massive amounts of churned data will help in customizing treatments

A $1.7 million donation from Montreal businessman Maxime Rémillard has been instrumental in creating a research consortium to improve the outcomes of lung cancer patients and increase their odds for survival.

The Karen Anthony Consortium for Lung Cancer Research will enable massive amounts of data on lung cancer to be integrated into a single, accessible repository. Scientists will then use artificial intelligence to generate sophisticated algorithms to churn the data.

The results will provide clinicians with crucial guidance in selecting and customizing the best therapies for each patient’s lung cancer. 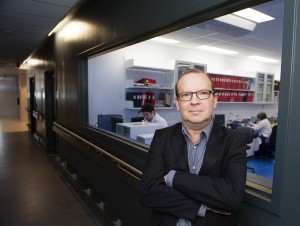 The consortium will be led by Dr. Alan Spatz, who will serve as Scientific Director. Dr. Spatz is JGH Chief of Pathology and a globally renowned researcher in molecular pathology and cancer.

He is also a Senior Investigator in the Lady Davis Institute at the JGH, and a Professor in the Departments of Pathology and Oncology at McGill University.

Mr. Rémillard explains that the consortium is named in memory of his mother, who died in 2019 after a valiant, two-year battle against lung cancer.

“I was deeply shaken by her death,” he says, “but I was also inspired to support cancer research that uses the latest technology to improve and accelerate patients’ treatment.”

Through the JGH Foundation, Mr. Rémillard had an opportunity to meet Dr. Spatz, who impressed him with “his passion and his vision,” as well as his determination “to take full advantage of the immense potential of artificial intelligence and the consolidation of data, which is a new and very promising concept.”

“Consolidating the data will allow us to move more quickly in developing treatment plans and delivering therapies to patients,” says Dr. Spatz.

“In bringing more data to bear on identifying the active mutations in cancer, we have more tools at our disposal to identify the therapy that will disrupt the specific pathway that generates a person’s cancer. Thus, we will be more effective in eradicating the malignancy.”

It has been estimated that in 2020, about 30,000 Canadians will be diagnosed with lung cancer, which is responsible for 25 per cent of all cancer deaths. Non-small-cell lung cancer is the most frequent type of lung cancer and the most common cause of cancer mortality.

Mr. Rémillard is a businessman and President of the private, Montreal-based firm, Remcorp, which invests in such sectors as technology, media, transportation services, health and wellness, and real estate.

He has also served on the boards of of numerous charitable organizations, including the Fondation du Musée Pointe-à-Callière. In recent years, he has partnered with the Mira Foundation, for which he raised nearly $2 million.

“The excellence and integrity of the JGH and its medical staff have instilled great confidence in me to proceed with this initiative.”

In addition, Mr. Rémillard and his family helped create the Yosh Taguchi Chair in Urological Cancer Research at McGill, as well as supporting and sponsoring numerous initiatives with Centraide and the JGH Foundation.

Mr. Rémillard says the JGH deserves to be the focal point of the consortium, because it has a reputation for quality and, on a more personal basis, it has provided him with exemplary care as a patient.

“The excellence and integrity of the hospital and its medical staff have instilled great confidence in me to proceed with this philanthropic initiative.”

This degree of generosity was also typical of his mother’s commitment to society, Mr. Rémillard notes. “I know that this is exactly what she would have done, if she had had a chance to contribute to Dr. Spatz’s research. With this donation, I hope to honour her memory, her life and her courage in her fight against cancer.”

“Thanks to Mr. Rémillard, this investment will make it possible for our scientists to advance knowledge and make the breakthrough discoveries that are needed to understand lung cancer in multiple dimensions,” says Bram Freedman, President and CEO of the JGH Foundation.

“The use of new artificial intelligence technologies will also provide new hope for the many families affected by this disease in Quebec and Canada.”

The McGill Initiative for Shared Database Across Sites

The Karen Anthony Consortium for Lung Cancer Research is the first project of the McGill Initiative for Shared Database Across Sites (MIDAS), which includes collaborators from the McGill University Health Centre.

“Each of these objectives represents innovative ways to identify new domains of medical action and opportunities to interact with industrial partners for drug and test development,” says Dr. Spatz.

“Clinical trials are increasingly designed to select patients based on a molecular profile that matches with the test drug, but we are reaching the limits of the approach solely based on gene analysis,” notes Dr. Gerald Batist, Director of the Segal Cancer Centre.

Dr. Batist, who is also Director of the McGill Centre for Translational Research in Cancer, adds: “We need to incorporate other data, as well, including the patient’s metabolic and immune status, the level of specific proteins made from genes, and the results of AI-based analysis of medical images.”

“Collectively, this team features highly complementary and world-leading expertise that will enable the successful execution of the proposed project,” says Dr. Jonathan Spicer, thoracic surgeon at the MUHC and Director of the McGill Thoracic Oncology Network. “Because of this gift, it is wonderful to see the McGill cancer research community unite under an umbrella that is based on data.”