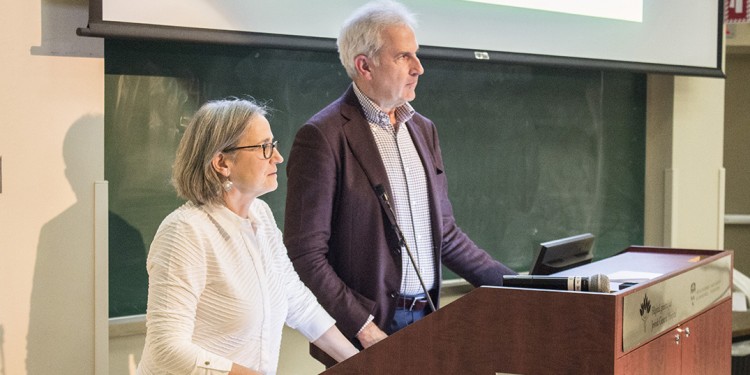 When care is given to individuals with advanced dementia, serious consideration should be given to avoid transferring them to a hospital, refrain from tube-feeding them, and decline testing or treating them for a bacterial infection, a U.S. geriatrics expert has told a JGH audience.

Dr. Susan Mitchell, Professor of Medicine at Harvard Medical School, said that avoiding these three measures is the preferred course of action for relatives or caregivers whose overriding concern is making the patient as comfortable as possible at the end of his or her life.

Dr. Mitchell explained that some decision-makers who act on behalf of patients with advanced dementia believe that taking aggressive steps to prolong life is often more important than the patient’s comfort.

However, she said, it is worth noting that patients with advanced dementia can feel badly traumatized in a hospital, that an agitated patient may be harmed by trying to pull out his or her feeding tube, and that testing for a bacterial infection can be an extremely distressing process whose results may be inconclusive.

Dr. Mitchell’s remarks were the focus of the annual Goldie Raymer Memorial Lecture, which was presented on October 28 in the Block Amphitheatre and organized by the JGH Division of Geriatric Medicine.

The public lecture series was established by Susan Raymer in memory of her mother, Goldie, who died in 2012 at the age of 97. The yearly talks are meant to increase awareness about the needs of the elderly, in order to help them stave off illness and provide them with a better quality of life in their final years.

Dr. Mitchell, a geriatrician and researcher who directs the Palliative Care in Aging Research Center at the Hinda and Arthur Marcus Institute for Aging Research in Boston, told the JGH audience that “advanced care planning is critical,” since this will has a major impact on the care that is provided in the end stage of the illness.

“What the family understands about the patient really translates into the experience of the patient near the end of life,” she said, adding that those with a firm understanding of the patient’s condition and prognosis are less likely to insist on needlessly aggressive, life-prolonging measures.

Dementia and Alzheimer’s disease by the numbers

Statistics cited by Dr. Susan Mitchell during her JGH lecture:

Dr. Mitchell explained that even though hand-feeding is more time-consuming than tube-feeding, it allows the patient to taste the food, while promoting social interaction. As well, she said, many major healthcare organizations have publicly stated that “tube-feeding has no demonstrable benefits to a person with advanced dementia and should not be offered.”

While giving a patient antibiotics may make sense in some instances (such as pneumonia), it generally does not change life expectancy, Dr. Mitchell said. Furthermore, the testing process itself—drawing blood, getting a chest x-ray, providing a urine sample by catheter—can be a source of great discomfort for little benefit, she added.

Similarly, Dr. Mitchell said, transferring the patient to a hospital is worthwhile if a broken bone needs to be treated, “but I can’t think of many other situations where this kind of transfer would actually be promoting comfort.”

From the archives: Mayor Jean Drapeau pays a visit

From the archives: Iron lung for polio treatment