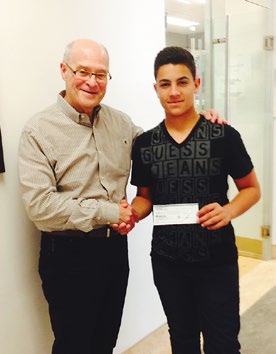 Jacob Frankiel celebrated his bar mitzvah in a poignant way by donating $500 from his gifts to the Leukemia Fund at the JGH, in memory of his grandmother, Cathy Edery-Guigui, and in honour of Dr. Stephen Caplan, Head of the JGH Division of Hematology-Oncology. This fund supports research and clinical trials in leukemia, aimed at increasing the cure rate and survival of patients with this disease. Samuel April also decided to honour his late grandfather, Cecil April, who meant a great deal to him, by contributing $500 from his bar mizvah gifts to the Cecil April Memorial Fund at the JGH. This tribute fund supports research into colorectal cancer. Thank you, Jacob and Samuel, for paying tribute to your loved one’s memory in such a meaningful way!