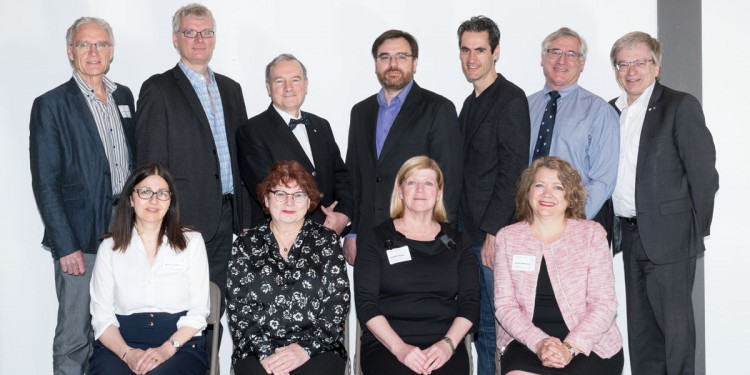 Among those who attended the Science Day at the JGH were (from left) Dr. Remi Quirion (Chief Scientist of Quebec), Dr. Sonia Bélanger (CEO of the CIUSSS of South-Central Montreal), Dr. Sylvie Simard (Director of University Education and Reararch for the CIUSSS of South-Central Montreal), Dr. Sylvie Belleville (Director of the Consortium for the Early Identification Alzheimer’s Disease – Quebec [CIMA-Q]), Dr. Andréa LeBlanc (Senior Investigator at the Lady Davis Institute [LDI] and Director of CIMA-Q), Dr. Roderick McInnes (Director of the LDI), Dr. Lawrence Rosenberg (President and CEO of CIUSSS West-Central Montreal), and Dr. Nicole Leclerc, (Professor of Neuroscience at the University of Montreal Hospital Centre).

Researchers in the field of Alzheimer’s disease gathered at the JGH in May to share ideas and insights at the annual Science Day of the Consortium for the Early Identification of Alzheimer’s Disease – Quebec.

The goals of the event’s participants—including leading investigators from the Lady Davis Institute at the JGH—and of their colleagues in the Consortium are to develop new diagnostic tests for dementia, to detect early biological changes that signal the onset of the disease, and to identify promising means of slowing or stopping the progression of the disease.

The Consortium, launched in 2014, is a network of more than 90 clinicians and scientists across Quebec who are committed to collaborating and advancing the fight against Alzheimer’s disease.

Eight is great for cyclists in anti-cancer ride