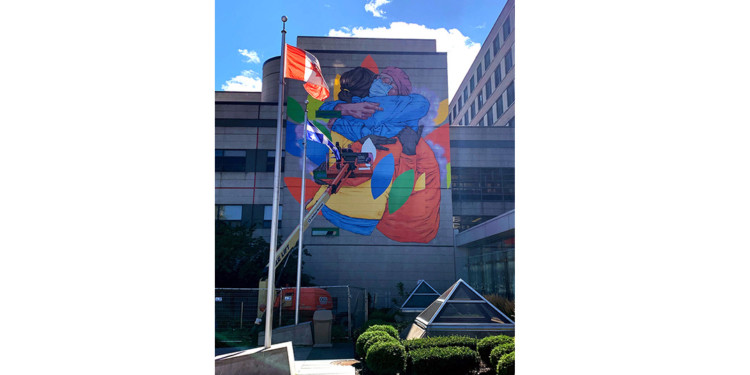 In late August, the finishing touches were placed on the painted mural that covers much of the eastern wall of Pavilion G, facing the hospital’s main entrance. The mural depicts a grateful patient and a healthcare worker, who embrace while wearing protective clothing. Swirling around them are large versions of the leaves that appear in the JGH logo. (Click on the photo to enlarge it.)

A towering mural in vibrant colours has been inaugurated at the JGH to honour Montreal’s front-line healthcare workers and thank them for putting their well-being at risk to protect the public during the COVID-19 pandemic.

The enormous painting by Quebec artist Patrick Forchild was dedicated on September 10 in a ceremony at the hospital’s main entrance, near the mural which covers much of the eastern wall of Pavilion G.

The work of art, an initiative of Montreal’s diplomatic and consular corps, depicts an appreciative patient and an empathetic healthcare worker, who are hugging while wearing protective clothing. Swirling around them are large versions of the multi-coloured leaves that appear on the JGH logo.

The mural recognizes the dedication and bravery of the full range of front-line personnel, including doctors, nurses and allied health professionals. Through an abstract twist on a symbolic concept, the mural communicates the public’s apprecation for the courage of those who kept patients safe.

“The mural reminds us how harrowing this crisis has been, making gestures of affection and human warmth so difficult to express.”

“It’s a symbolic way of reminding us how harrowing this crisis has been,” Mr. Forchild adds, “because it has made gestures of affection and human warmth so difficult to express.”

The project began earlier this year with a phone call to Bram Freedman, President and CEO of the JGH Foundation, from David Levy, Consul General of Israel for Quebec, who wanted to honour Montreal’s healthcare workers.

The work was produced with the MURAL Festival of Montreal and was made possible with the support of the diplomatic and consular corps and the Foundation. Painting began on August 18 and lasted 10 days.

At the inauguration ceremony, Mr. Freedman thanked the diplomatic and consular corps, represented by Alejandro Estivill, Consul General of Mexico. Mr. Estivill said he and his colleagues “wanted to produce a city-wide homage to all of the COVID-19 front-line heroes. We chose the JGH, because it is a symbol of the fight against the pandemic in Montreal.”

Dr. Lawrence Rosenberg, President and CEO of CIUSSS West-Central Montreal, noted that even though the battle against COVID-19 had inspired the mural, the emotions that it depicts have existed for decades in interactions in the city’s healthcare institutions. It was the extraordinary threat of the pandemic that prompted such a focused and unified effort to protect and treat all Montrealers.

“Clinical excellence has always gone hand-in-hand with our commitment to seeing each patient as a whole person,” Dr. Rosenberg said. “Their emotional, psychological and even spiritual needs must be addressed at the same that the body itself is being treated.”